A screenshot of a Nigerian television station showing a breakdown of "472 confirmed cases" has been shared on Facebook, Twitter, and WhatsApp alongside claims it shows novel coronavirus cases across the country. But the image is being shared out of context: It shows figures for Lassa fever, not coronavirus.

The screenshot from a broadcast on Nigeria’s ChannelsTV station appears in several posts on Facebook, including this one published on March 22, 2020.

The post’s caption partly reads: “I just knew it. Nigerians, just stay home if you love your life.” 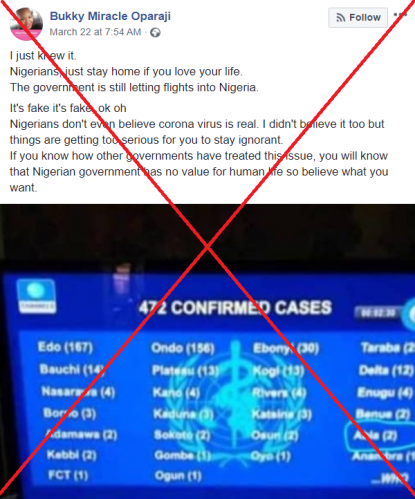 The post alleges that Nigerians “don’t even believe corona virus is real(sic)”, and attributed the “472 confirmed cases” to the pandemic that has caused more than 18,000 deaths globally and put one-third of the world’s population under lockdown.

The TV screenshot does not feature the words “coronavirus” or “COVID-19”, but references the World Health Organization (WHO) in the bottom right-hand corner.

But the claim is false: The data on the screen actually shows a breakdown of the spread of Lassa fever across Nigerian states.

Lassa fever is endemic in Nigeria and some other West African countries, including Benin, Ghana, Guinea, Liberia, Mali, Sierra Leone, and Togo. More than 900 cases of Lassa fever including at least 160 deaths have been recorded in Nigeria since the start of the year.

Fewer than 50 novel coronavirus cases have been confirmed in the West African country, as of March 25, 2020.

AFP found that the figure of “472 confirmed cases" that was wrongly attributed to coronavirus was indeed sourced from the World Health Organization; it represents the number of confirmed cases of Lassa fever in Nigeria between January 1 and February 9, 2020.

Cases were reported in 26 of Nigeria’s 36 states, including the capital Abuja.

AFP compared the breakdown of the figures across the 26 affected states on the WHO website and found it matched the one on the screenshot circulating on social media. 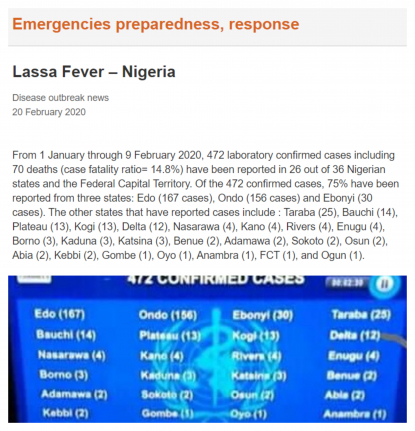 Screenshots of the WHO website and the television broadcast, taken on March 25, 2020

Moreover, the Nigeria Centre for Disease Control (NCDC) has dismissed the claim. The NCDC said in a tweet that the figures on the television screenshot “are reported cases of #Lassafever,” as of February 2020.

NCDC is currently managing a national #Lassafever outbreak. The figures which appear are reported cases of #Lassafever as at February

NCDC urges Nigerians to check its website for updates on the Lassa fever outbreak in the country.

ChannelsTV has also refuted the claim, saying that the screenshot “has been mischievously shared”. The television station says the breakdown of 472 confirmed cases was aired on Sunday, March 22, 2020, for “a report on Lassa Fever and not COVID-19”.

This graphic slide on "Confirmed Cases" which is making the rounds was used in a report on Lassa Fever and not COVID-19 as has been mischievously shared.

See the link to the original report, which aired on Sunday, March 22. https://t.co/B9AvQonh9x pic.twitter.com/hIeEylNCYu

More than 427,000 people have been infected with COVID-19 globally since the first cases of the virus were reported in the Chinese city of Wuhan in December 2019.