Multiple Facebook posts shared hundreds of times include a graphic from a New Zealand opposition party which claims “if cattle hoof prints cover 50% of a paddock, farmers will now be breaking the law”. The claim omits important context; the posts refer to new agricultural legislation in New Zealand which is set to come into effect in May 2021; the National Environmental Standards for Freshwater legislation only refers to hoof prints which are at least five centimetres deep, in a bid to protect the soil, New Zealand's Ministry for the Environment said.

The claim was published on Facebook by New Zealand’s New Conservative Party here. The post has been shared more than 290 times. 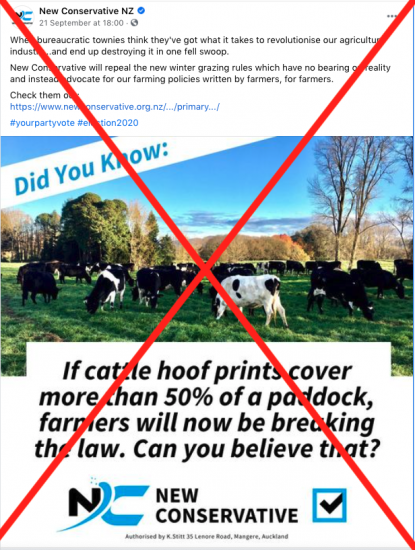 Text superimposed on a photo of grazing cattle reads: “If cattle hoof prints cover more than 50% of a paddock farmers will now be breaking the law. Can you believe that?"

The post's caption reads, in part: “When bureaucratic townies think they've got what it takes to revolutionise our agriculture industry...and end up destroying it in one fell swoop”.

The graphic has also been shared hundreds of times on Facebook, here, here and here.

The claim, however, omits important details about the legislation.

In response to the posts, a New Zealand Ministry for the Environment (MfE) spokesperson told AFP the claim was “not correct”.

“The regulations require farmers to meet a number of conditions for intensive winter grazing (which includes hoof prints or pugging that are five centimetres deep or more),” the MFE spokesperson said. “[They make] it clear that light surface disturbance is not ‘pugging’.”

Pugging is the compaction of soil that occurs after periods of bad weather, when stock trample typically wet ground with their hooves, according to New Zealand's Agricultural research body AgResearch. 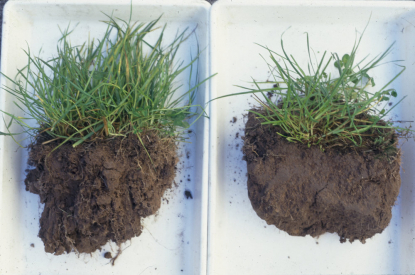 An image from the AgResearch website showing soil damaged by pugging (right) and undamaged soil (left).

New Zealand’s new National Environmental Standards for Freshwater legislation includes regulations that intend to limit pugging. The regulations, according to the legislation, are due to come into force on May 1, 2021.

This clause of the new legislation stipulates that “pugging of any depth must not cover more than 50% of the paddock”. Pugging is defined in the legislation as “the penetration of soil to a depth of 5 cm or more by the hooves of grazing livestock”.

The definition of pugging was amended to "penetration of soil of more than 5cm" in August, according to a government press release published on August 26, 2020.

The amendment was made after the Federated Farmers of New Zealand criticised the proposed legislation, saying the regulations around the practice were “unworkable”.

Before the changes were finalised by the New Zealand Cabinet, Federated Farmers of New Zealand issued this press release announcing they were “pleased to see Minister make a start on fixing new water regs”.

“This was going to be entirely unworkable for Southland farmers, and many others around the country during cold, wet winters. This should be the start of many more changes to these regulations,” spokesperson Chris Allen was quoted as saying in the August 25 press release.