The claim was shared by a New Zealand-based user here. 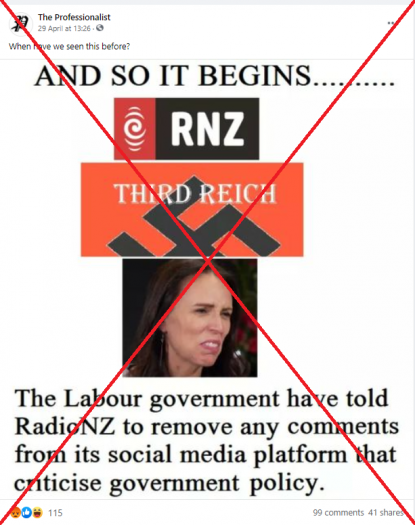 The image features a photo of Jacinda Ardern grimacing underneath a Nazi Swastika with “THIRD REICH” emblazoned across it.

Text superimposed below the image reads: “The Labour government have told RadioNZ to remove any comments from its social media platform that criticise government policy.”

The post’s caption says: “When have we seen this before?”

The image has also been shared here and here by other New Zealand-based Facebook users.

New Zealand’s Prime Minister’s Office told AFP: “No such instruction was ever made by the government. This appears to be a malicious post.”

“There has been no request from the NZ government to remove any comments from our social media pages that criticise government policy,” RNZ said.

The national broadcaster indicated it planned to take a more active role in moderating abusive comments on its social media channels, the updated policy explains here.

The policy allows for RNZ to “proactively disable comments on posts which may attract abusive or harmful comments, or when resources are required elsewhere”.

“No one at RNZ has to put up with abuse as part of their work, nor do other members of our audience,” the policy reads. “We may issue a warning, but we reserve the right to delete comments, ban accounts, and repeated or egregious comments may be referred under the Harmful Digital Communications legislation".

Despite the false claim circulated on Facebook, comments critical of New Zealand's government were still visible on the broadcaster’s social media channels.

One commenter posted on this news story about a fiery debate in parliament over sexual assault and rape allegations that “Labour are bigots”.

“The Labour Speaker of the House, Trevor Mallard has reflected exactly how they all tactically work to coerce others thinking. Using their venomous hate, lies and name calling to push that false narrative of theirs,” the commenter goes on to say.

Other posts, see here and here, have had their comments restricted in line with RNZ’s new policies.