A post shared thousands of times on Facebook says “the majority of the early slaves to the New World were actually white” and that African slaves “were often treated far better than their Irish counterparts.” These claims, and others in the post, are false, according to historians and experts. 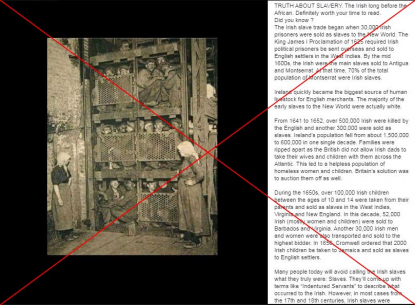 Similar claims have been made across several posts spreading misinformation about slavery and Irish indentured servants, as fact-checked by AFP.

The “Irish Slaves Myth” seems to regularly gain traction in response to the surges in anti-racism protests and calls for reparations for African slavery, as explained here by Liam Hogan, an Irish librarian and historian.

The core claim that Irish workers in the colonies were slaves is false. The term “indentured servants,” is more accurate.

There is ample evidence that “English, Welsh, Scottish, and Irish nationals desiring immigration to the island, but lacking the means to pay their passage and sustenance, voluntarily indentured themselves,” according to Jerome Handler, senior scholar at Virginia Humanities and Matthew C. Reilly, assistant professor of anthropology at the City University of New York.

A distinction between indentured servants and slaves was cited as early as 1722 in the History of Virginia by Robert Beverley Jr. 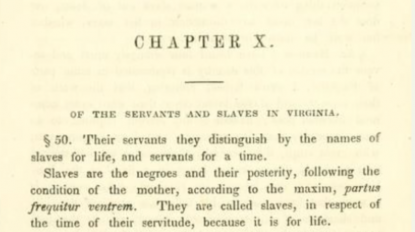 Screenshot, taken on June 18 of an excerpt of Robert Beverley Jr’s History of Virginia (1722)

This is confirmed by Brendan Wolfe, editor of Encyclopedia Virginia: “Indentured servants were men and women who signed a contract (also known as an indenture or a covenant) by which they agreed to work for a certain number of years in exchange for transportation to Virginia and, once they arrived, food, clothing, and shelter.”

The photograph used alongside the post, and described as a “representation,” does not depict Irish indentured servants, nor was it taken in North America, nor in the same century as claimed.

A reverse image search revealed versions of this photograph which can be found in historical blogs, on Pinterest and Reddit, claiming that it is of Italian miners in Belgium around 1900.

“This photo was taken around the end of the 19th beginning of the 20th century” Colette Ista, Assistant Director of the UNESCO World Heritage listed Bois Du Cazier mine museum in Belgium, told AFP via email.

“It shows a cage [elevator] in a Mariemont-Bascoup operated mine in central Belgium, located near the town of La Louvière.” added Ista, confirming that this photograph has no link to Ireland or the North American colonies.

The King James I 1625 proclamation

This list of Stuart royal proclamations, compiled by James Larkin and Paul Hughes and published by the University of Oxford, shows that King James I issued six royal proclamations in 1625, the year of his death. Contrary to claims in the post, none of them related to the treatment of the Irish.

However, an earlier proclamation issued by James I in 1603 “criminalized repeated vagabondage and idleness”, according to Hogan.

The punishment for this would be banishment to “New-found Land, the East and West Indies, France, Germanie, and the Low-Countries, or any of them,” it said.

“These ideological attempts to ‘correct’ poverty (through subjugation and forced labour) partly explain the disproportionately high level of forced transportations from Ireland to the American colonies,” Hogan said.

It is true that the majority of the 1,000 families living on the Caribbean island of Montserrat in the mid 17th century were Irish, as written by Kevin Kenny in Ireland and the British Empire.

By the end of the 17th century, “nearly 70 percent of Montserrat’s white population was Irish” Kenny said, however, this number does not include the island’s native population.

“These Irish settlers not only prospered but ‘became more economically powerful’ than their Scottish and English counterparts, largely because ‘they knew how to be hard and efficient slave masters,’” added Kenny, showing that the claim that the Irish in Montserrat were slaves, is also false.

“Despite losing some 20-40 percent of its population due to war and famine from 1641-53, Ireland’s population still doubled over the course of the 17th century from around one million to two million inhabitants,” Padraig Lenihan, a historian at the National University of Ireland, Galway told the Irish History Show.

Hogan wrote that this was another “massively exaggerated claim which does harm to the historical record of the officially sanctioned transportations and illicit kidnapping that did occur.”

“The most infamous case involved David Selleck, a prominent tobacco merchant from Boston, New England. On the 6 September 1653 a warrant was awarded to Selleck (after he had petitioned for it) to transport 400 Irish children into New England and Virginia.”

Hogan added that “despite the initial warrant to transport children they instead sought out adolescents and adults” who were “subsequently sold against their will as indentured servants” from one ship off Rappahannock, Virginia and another off New England.

Although conditions were very poor, and many were taken against their will, it is false to describe them as slaves, as they had terms of servitude and would be free once it had ended, unlike African slaves of the time who would remain enslaved for life, as described by historians Handler and Reilly, and in Beverley’s 1722 “History of Virginia”.

This claim is false, and brings into question how this could relate to the other claims about 300,000 Irish slaves or 100,000 Irish children, if such claims were true.

“This exaggerated figure of around 52,000 has lineage. It can be traced back to Sean O’Callaghan’s To Hell or Barbados. O’Callaghan incorrectly attributes this number to Aubrey Gwynn. But he either misread Gwynn or has deliberately misled the reader because Gwynn took a guess at 16,000 sent to the West Indies and his total estimate of 50,000 includes the 34,000 that left Ireland for the continent” Hogan wrote.

There is no evidence to support this claim. In fact, it appears that African slaves were more economical than white indentured servants of the time.

“Planters eventually turned to black slaves as their principal source of bound labor,” wrote economist David Galenson. “The transition from servants to slaves, which occurred at different times in these regions, and at different rates, appears explicable in terms of the changing relative costs of the two types of labor faced by colonial planters.”

“There is no evidence for any of these claims in the British West Indies and the British North American colonies. These ahistorical claims are part racialised sadomasochistic fantasy and part old white supremacist myth á la ‘The Birth of a Nation’ that heighten racist sentiment in the ‘Irish slaves’ meme,” wrote Hogan.

He points to this 1664 Act by British colonists which criminalized interracial marraige, stating that any white woman who married an African slave would have to serve as a life-long slave like her husband. Their children would too.

This claim is similar to ones made in other social media posts, stating that 132 Irish slaves had been thrown overboard from an English ship. AFP did not find any historical evidence of 1,302 slaves being thrown off a British ship.

Many of the false claims in this post appear to come from a 2003 blog post by James F Cavanaugh, which cites little historical evidence. Although the website is now unavailable, an archived version can be found here.

According to the Southern Poverty Law Center, a non-profit organization that monitors hate groups throughout the US and exposes their activities to law enforcement agencies, posts like these have been “weaponized by racists and conspiracy theorists before the Web and now reaching vast new audiences online.”