Skip to main content
Members of the Supreme Court of the Philippines in Manila on August 28, 2018. (AFP / Ted Aljibe)

A claim that the Philippine Supreme Court "passed" a new law that could "imprison husbands proven to be unfaithful" has been shared thousands of times in multiple posts on Facebook in October 2020. However, this claim omits important context: the Supreme Court recently ruled to uphold a lower court's decision that delivered a prison sentence to a man found guilty of having an affair; the lower court decision is in line with an anti-violence against women law that came into force in 2004. 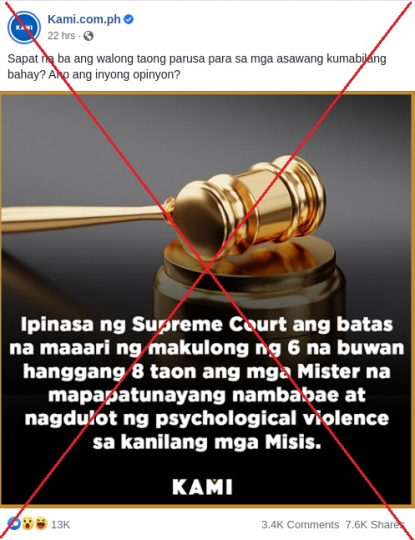 A screenshot of the misleading post, taken on November 3, 2020

The Tagalog text overlay in the image translates to English as: "The Supreme Court passed a law that could imprison for 6 months to 8 years Husbands proven unfaithful and have caused psychological violence to their Wives."

The claim circulated after the Philippine Supreme Court delivered a decision on September 8, 2020 that upheld a guilty verdict and prison sentence for a man who was found guilty of having an extramarital affair. Here is a report by local media outlet Inquirer on the decision.

However, these Facebook posts omit important context; the Philippine Supreme Court has not "passed" any new laws related to the earlier sentencing.

Closer examination of the Supreme Court verdict, available here on its website, indicates that the defendant was found “guilty of violating Republic Act (R.A.) No. 9262, or the Anti-Violence Against Women and Their Children Act of 2004”.

The law, which defines and penalises violence against women and children, was enacted on March 8, 2004, according to a government statement here.

In an email dated October 30, 2020, she said: “Marital infidelity per se is not a criminal act unless it amounts to adultery on the part of the wife and concubinage on the part of the husband. If such infidelity has resulted in mental and emotional anguish and suffering, as in the (Supreme Court) case… then the act is punished under RA 9262 under psychological violence. What is punished is the resulting consequence of marital infidelity.”

Meanwhile, keyword searches on the House of Representatives website did find that two bills seeking to revise the country’s adultery laws had been filed to date. As of November 3, 2020, both remain at “pending with the Committee” level. 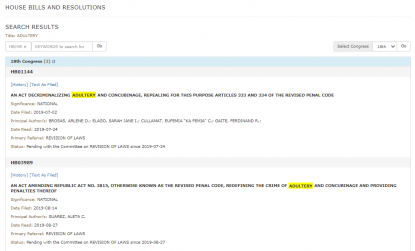 Screenshot of the House of Representatives website, taken on November 3, 2020