Skip to main content
People wearing facemasks buy supplies at a crowded vegetable market at Piliyandala on the outskirts of Sri Lanka's capital city Colombo on March 24, 2020, as the authorities briefly lifted a curfew to allow residents to stock up on essentials amid concerns over the spread of the COVID-19 coronavirus. (AFP / Lakruwan Wanniarachchi)

A photo of a newspaper report claiming that 25 containers of substandard canned fish were distributed in Sri Lanka has been shared hundreds of times in multiple Facebook posts in October 2020. The claim, however, omits important context; Sri Lankan customs and standards officials said although they had discovered the substandard canned fish in October 2020, the containers were not distributed into the local market and were being re-exported.

The image was published on Facebook here on October 13, 2020. The post has been shared more than 800 times.

The Sinhala-language newspaper article’s headline translates to English as: “Re-exportation aside; substandard canned fish off 25 containers from China released to shops”.

The post’s caption as: “With effect from tonight, canned fish will be Rs. 200… Attached this photo just because”. 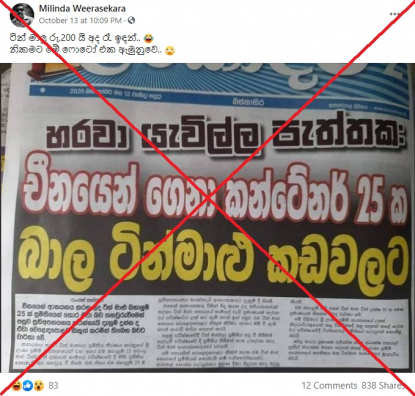 The post circulated just hours after the Sri Lankan government announced that taxes on essential goods including canned fish would be removed, as stated here in a press release issued by the Sri Lankan president’s office.

A similar claim about substandard canned fish being distributed in Sri Lanka was also published on Facebook here and here.

The claim, however, omits important context, according to government officials.

In a media briefing on October 15, 2020, Ministry of Trade Secretary Badrani Jayawardena said there was “no truth” to the claim made in the newspaper article.

“The claim published in a newspaper on October 12, 2020, that substandard canned fish are being released to the local market is a complete falsification... There is no truth to these claims, since the consignment of containers holding substandard canned fish, was identified and is now held under the purview of Sri Lanka Customs, awaiting re-exportation,” Jayawardena said.

The broadcasted remarks can be seen in this YouTube clip (from the 15-minute 26-mark to the 16-minute 52-second mark) published by Sri Lanka's ITN News on October 15, 2020.

“The containers are being held under the purview of customs and there is no way for this canned fish to enter local markets as they are currently going through the process of being re-exported,” he told AFP by phone on October 19, 2020.

A spokesperson for the Sri Lanka Standards Institute’s (SLSI) said Sri Lanka's import inspection unit did discover substandard canned fish in October 2020 but said none of the products were released into the market.

“A total of 1,000 containers of canned fish were imported from China and SLSI subjected the containers to basic standard checks and we found 25 of them did not meet the necessary requirements. Therefore, they are now held under the purview of customs and are being re-exported. Without the authorization of the SLSI, no items off any container bringing food provisions are released to the local market,” the official told AFP by phone on October 16, 2020.