Skip to main content
A worker makes tofu from soybeans at a facility in Banda Aceh on October 12, 2020. (Photo by CHAIDEER MAHYUDDIN / AFP) (AFP / Chaideer Mahyuddin)

Multiple posts shared repeatedly on Facebook and various websites claim that eating soybeans can increase the risk of developing Parkinson’s disease. The claim is misleading; health experts told AFP there is insufficient scientific evidence that consuming soybeans can negatively affect the health of a person's brain; in response to the misleading posts, Thailand’s Food and Drug Administration said the claim was "incorrect".

The claim was published here on Facebook on January 3, 2020. It has been seen shared more than 200 times. 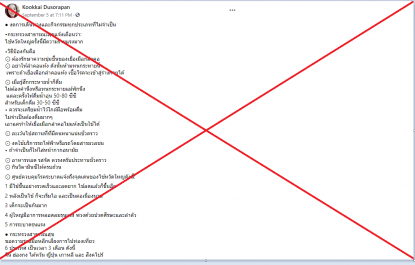 The Thai-language post translates to English in part as: “#Whydoestofudestroyyourbrain? I usually hear this sentence often: ‘Provinces that have a lot of vegetarian factories and eat a lot of soy-based produce have a lot of people with Parkinson’s disease.’

“Why? This is because eating products made from soybeans, such as tofu, can increase the risk of memory loss, [resulting in Parkinson’s disease].”

Parkinson’s disease is a brain disorder that affects the nerve cells in the brain. Most of the early symptoms are physical, such as "muscle rigidity, tremors, and changes in speech and gait", as described by US-based health news website WebMD, but many also develop the common complication dementia, which can cause profound memory loss.

A similar claim was also shared on Facebook here, here, and here.

It was also published here on the website of the Thai Health Promotion Foundation (ThaiHealth), a government agency that aims to “enhance health promotive capability...to support health promotion movement in Thailand”, in July 2008. 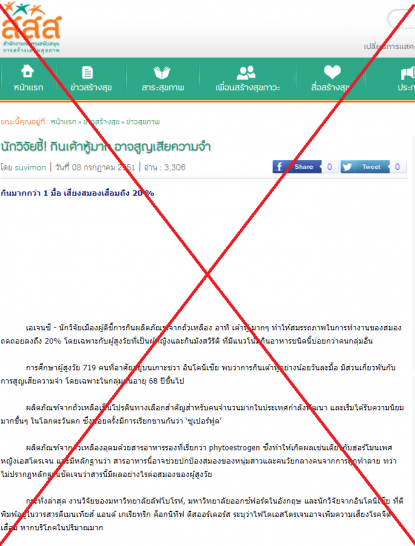 The post’s Thai headline reads: “Researchers reveal! Eating too much tofu may make you lose your memory! Eating them more than once can increase the risk of damaging the brain by 20%”

In response to the misleading posts, Kanitha Tananuwong, associate professor at Chulalongkorn University’s Department of Food Technology said there is insufficient evidence that consuming soybeans has “negative effects” on the brain.

During a phone conversation with AFP on October 15, 2020, she said: “There is much-contradicting research about the health benefits of eating soybeans, however, we cannot definitively say that eating soybeans will have a negative effect on the brain. The elderly can continue eating them as normal. Generally speaking, there is nothing to fear about eating soybeans.”

Kanitha said that to maximise the health benefits of any food, people should vary "the kinds of food they eat".

Below is a screenshot of the statement on the FDA’s website: 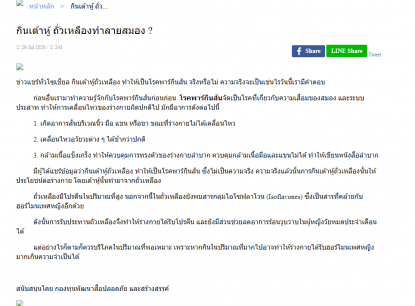 The article reads, in part: “Parkinson’s disease causes deterioration of the brain and nervous system. There were people sharing [posts online] that eating soybean tofu causes Parkinson’s disease. This is incorrect.

“In fact, eating soybean tofu is beneficial to health as soybeans are high in protein. However, you should eat an appropriate amount of it as it can increase female hormone levels.”