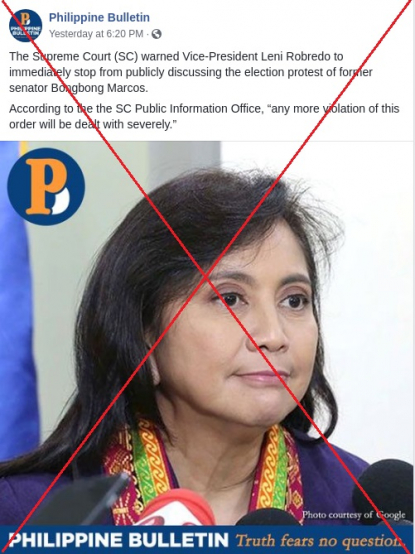 A screenshot of the misleading post, taken on November 12, 2020

Alongside a photo of Leni Robredo, the post states: “The Supreme Court (SC) warned Vice-President Leni Robredo to immediately stop from publicly discussing the election protest of former senator Bongbong Marcos. / According to the the (sic) SC Public Information Office, ‘any more violation of this order will be dealt with severely.’”

Former senator Bongbong Marcos filed a poll dispute after losing to Robredo in the 2016 vice presidential race in the Philippines.

A similar claim was also shared in Facebook posts here and here.

The Supreme Court in fact issued a warning directed at both the Robredo and Marcos camps, not just Robredo alone.

“In view of the recent appearances and statements of the parties, their counsels and their agents in various media outlets including print, broadcast and social media, the Presidential Electoral Tribunal reiterates its Resolutions dated February 13, 2018 and March 20, 2018 directing the parties to strictly observe the sub judice rule. These are not the proper venues to litigate their case. The parties, their counsels and their agents are STERNLY WARNED that any more violation of this order shall be dealt with more severely.”

A “sub judice” case refers to a case that is currently being studied in court, meaning it contains details that cannot be discussed in the media, according to this definition from the Cambridge dictionary.