Skip to main content
South Koreans visit the grave of their relative killed in the 1950-53 Korean War, during a ceremony to mark Korean Memorial Day at the National Cemetery in Seoul on June 6, 2017. (AFP / Jung Yeon-je)

Multiple Korean-language posts claim a new rule has banned visitors from singing the national anthem and hoisting the country's flag at South Korea’s cemetery for war veterans. The posts circulated online in May 2021 after anti-government protesters were ordered to leave the cemetery. But the claim lacks important context: a spokeswoman for the cemetery told AFP the protesters were ejected for "strange" behaviour at the cemetery--not for singing the national anthem or hoisting the flag. The law states ceremonies held at the cemetery must “not degrade [its] sanctity”.

The Korean-language claim was shared here on Facebook on May 6, 2021.

It reads in part: “At the National Cemetery, hoisting the Korean national flag and singing national anthem are both prohibited. Why? Because they are not 'respectful’ enough. Since when they first introduced such a rule? Since the current Moon administration kicked off. Can't believe it? Try visiting the Seoul National Cemetery and see how it goes. I tried.” 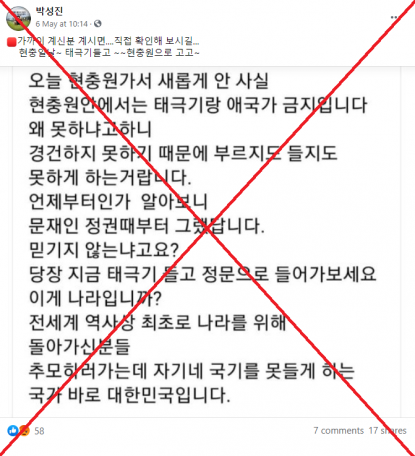 The National Cemetery located in the capital Seoul is a government-run facility reserved for South Korean war veterans.

An identical claim was also shared on Facebook here, here and here.

The claim circulated online in May 2021 after anti-government protesters attempted to stage a demonstration at the cemetery.

A spokeswoman at the National Cemetery told AFP on May 10 the protesters were not turned away for singing the national anthem or hoisting the country's flag.

As of May 17, 2021, no law prohibits visitors from hoisting South Korea’s flag or singing the national anthem at the cemetery.

Under the law, however, events cannot be held that “undermine the dignity of a national cemetery” or “degrade [its] sanctity”.

This is laid out in South Korea’s Act on the Establishment and Management of National Cemeteries.

In fact, the South Korean national flag has been raised and the national anthem has been sung at various recent events at the National Cemetery.

This video shows both activities at a Memorial Day celebration in 2020.

It was shared on the official YouTube channel for South Korea's state-backed broadcaster KTV on June 6, 2020.

There have been no major events held at the cemetery in 2021 due to coronavirus restrictions, as shown in online schedules here and here.