Skip to main content
New Zealand's Prime Minister Jacinda Ardern speaks to media regarding the latest case of COVID-19 coronavirus infections, breaking a 102-day run of no local transmissions, at the parliament in Auckland on August 12, 2020. (AFP / Marty Melville)

A video has been viewed tens of thousands of times in multiple posts on Facebook and Twitter alongside a claim it shows New Zealand Prime Minister Jacinda Ardern visiting a Hindu temple after declaring the country had reached its 100th consecutive day of no local coronavirus transmissions. The claim is misleading; the video shows Ardern visiting the temple on August 6, 2020, three days before the country hit its 100-day milestone; on August 11, New Zealand recorded four new locally transmitted COVID-19 infections after 102 consecutive days of no community infections.

The two-minute and 54-second video was published on Facebook here on August 8, 2020. 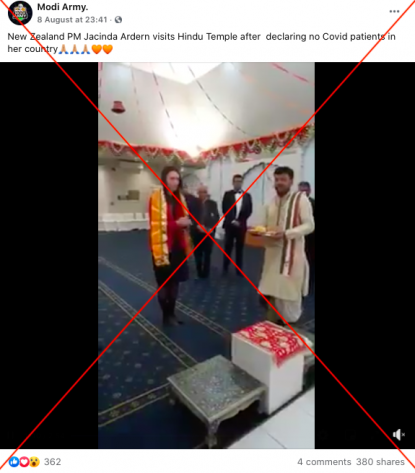 Keyword and reverse image searches found that the footage shows Ardern visiting the Hindu temple in the city of Auckland on August 6, 2020.

Three days later, on August 9, New Zealand announced that it had been 100 days since it had recorded a single COVID-19 case that “was acquired locally from an unknown source,” the Ministry of Health declared here.

Below is a screenshot comparison of keyframes in the misleading post (L) and the YouTube video (R):

A screenshot comparison of the misleading video and the YouTube video.

The August 6 event was also attended by Muktesh Pardeshi, India’s High Commissioner to New Zealand. Pardeshi published photos of Ardern’s visit to the temple here on Twitter on August 8.

“Some precious moments with the honourable Prime Minister of New Zealand, Ardern, at ⁦Indian Newslink event on 6 Aug 2020. She paid a short visit to Radha Krishna Mandir and enjoyed a simple Indian vegetarian meal- Puri, Chhole and Daal,” the tweet read. 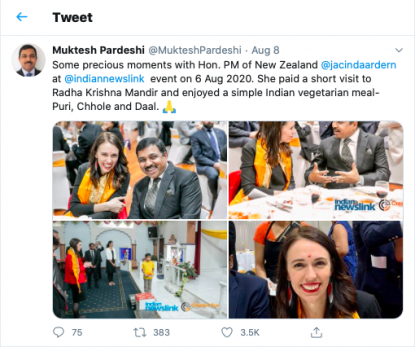 The misleading post was also debunked by BOOM, an Indian fact-checking organisation, here on August 11, 2020,