Skip to main content
Riot police (L) deploy pepper spray toward journalists (R) as protesters gathered for a rally against a new national security law in Hong Kong on July 1, 2020, on the 23rd anniversary of the city's handover from Britain to China. (AFP / Dale De La Rey) 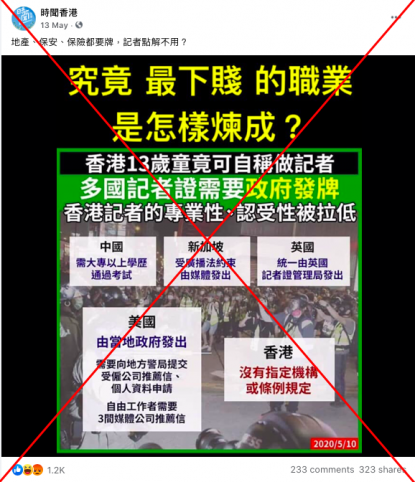 The traditional-Chinese graphic translates to English as: “How did the scabbiest profession develop?/ A 13-year-old child claimed to be a journalist in Hong Kong; many countries' press cards are issued by their government./ Hong Kong journalists’ credibility got lowered.”

The post goes on to suggest that journalists in China, Singapore, the UK and the US can only operate if they obtain government-issued press passes. It suggests Hong Kong should adopt the same system.

The graphic reads: “China - journalists are required to take an examination and have to receive tertiary education;

“Singapore - news agencies are restricted by the Broadcast Act, and they could issue their own press passes;

“UK - all press passes are issued by the United Kingdom Press Pass Authority;

The post’s caption translates as: “Realtors, security guards and insurancers all need a liason, why don't the journalists need one as well?”

Some Facebook users appeared to be misled by the claim, posting comments such as: “[Hong Kong] should learn from the UK and US to have their government-issued press cards, in this case, those yellow-ribbons [pro-democracy] parties will be speechless. Even if they do, they will find it self-contradictory” and “it’s best to learn from the UK and US”.

Screenshots, taken on July 31, 2020, of the comments under the misleading post.

The countries listed in the graphic do not require journalists to have government-issued press cards, with the exception of China.

The Singaporean government issues Press Accreditation Cards (PAC) to journalists to grant them access to government information and events. According to the Singapore Ministry of Communications and Information's guidelines, however, journalists are not required to obtain a PAC in order to work in Singapore.

While some media in Singapore is restricted by the Broadcast Act, the legislation does not mandate the distribution of press cards.

“It is totally unacceptable that a government would decide who is or is not a journalist,”

The UK Press Pass Authority issues press credentials in the UK, but the organisation is wholly owned and collectively controlled by major UK media organisations -- not the government.

The UKPPA states that press cards give no authority or privileges, but they can be used as identification to give journalists “access beyond that afforded to the general public."

In the United States, journalists are not required to acquire government-issued press credentials.

“It is totally unacceptable that a government would decide who is or is not a journalist,” Reporters Without Borders (RSF) told AFP by email on July 30, 2020.

RSF said that China, which does require government-issued press credentials, has one of the most restrictive media environments in the world. The country is currently ranked 177th out of 180 countries in RSF’s 2020 World Press Freedom Index.

"Credibility of the media has no direct relations with the issue of who issues press cards. To say so is misleading,” he told AFP in an email on July 30, 2020.

The misleading claim made in the graphic was also debunked by Hong Kong fact checking organisations Factcheck Lab and Kauyim.