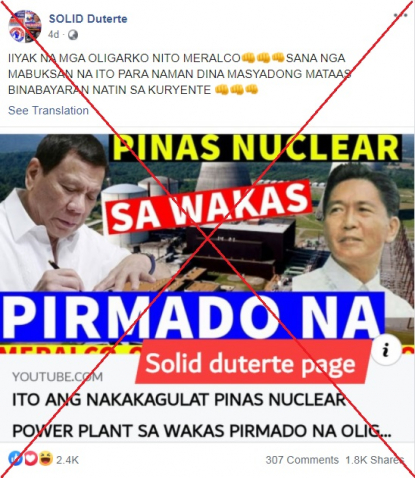 A screenshot of the misleading post, taken on September 1, 2020

The photo shows an image of Duterte alongside an image of the late president Ferdinand Marcos. Under Marcos’ term from 1965 to 1986, the Bataan Nuclear Power Plant was built but never used.

Meralco is the largest private sector electricity distributor in the country, according to its corporate profile.

In response to the posts, Michel Kristian Ablan, an assistant secretary at the presidential communications office, told AFP the most recent measure signed by the president related to nuclear power was this executive order.

The order does not mention opening a nuclear power plant, but states in part: “The government shall conduct a study for the adoption of a National Position on a Nuclear Energy Program… Review the existing legal framework, study the viability of nuclear energy, and recommend the necessary steps in the utilization of nuclear energy, as well as existing facilities such as but not limited to the Bataan Nuclear Power Plant”.

Multiple keyword searches on the websites of the Philippine House of Representatives here and Senate here show there was no legislative measure to open a nuclear power plant signed in August 2020.