Multiple posts shared hundreds of times on Facebook claim that Sri Lankan President Gotabaya Rajapaksa appointed a committee of three former ministers to review an expert committee’s report. The claim also circulated on WhatsApp. The claim is misleading; the offices of the president and the former ministers cited in the misleading posts said no such committee was ever formed.

The text image features a photo of President Rajapaksa posing with the expert committee that was appointed to review the Millennium Challenge Corporation (MCC) Sri Lanka compact. The MCC is a US-based international aid and development agency that in 2019 established a five-year agreement with the Sri Lankan government to promote economic growth.

The Sinhala-language text in the image translates to English as:  “Apparently the committee report of the three professors cannot be comprehended it seems!!

“So he has appointed three people of his intelligence level to study that report!! Here’s the trio!! 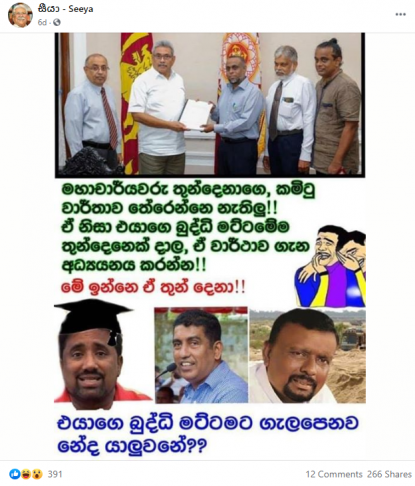 The MCC agreement was criticised by some due to concerns over Sri Lanka’s sovereign integrity.

In December 2019, the Sri Lankan government appointed an expert committee to conduct an independent and professional review of the MCC’s compact.

A similar claim about Rajapaksa appointing another committee to analyse the expert committee’s reports was also published on Facebook here, here and here.

“No such committee has been appointed to further analyse the review report by the expert panel,” Mohan Samaranayake, Rajapaksa’s media division director, told AFP by phone on July 17, 2020.

Samaranayake added that “if such a decision was made, the announcement would definitely be made via official channels of the [President’s Media Division (PMD)].”

A search of the PMD website and its Twitter feed found no announcement about the alleged new committee of former ministers.

In phone interviews with AFP, representatives for all three former ministers named in the misleading posts also denied the formation of a new panel to analyse the expert committee’s MCC review report.

In July 2020, Rajapaksa did ask all ministers to submit their views on the MCC pact, however, there was no announcement of the alleged three-member committee.