Skip to main content
Police personnel hold up placards reminding people to stay at home amid concerns of the spread of the COVID-19 coronavirus in Manila on March 31, 2020. (AFP / Maria Tan)

Multiple Facebook posts shared thousands of times in April 2020 purport to compare novel coronavirus lockdown measures in countries including South Korea, Japan and the Philippines. The posts claim the virus is now "gone" in South Korea because residents stayed at home for three weeks and that the epidemic has been “controlled” in Japan. The posts also claim that by contrast, people in the Philippines have taken a careless aproach to the virus. The claims are misleading; official data shows South Korea continued to face new cases of COVID-19 in April 2020; officials in Japan said COVID-19 cases were rapidly increasing in the same month.

The claims were published on Facebook here on April 2, 2020. The post has since been shared more than 4,900 times. 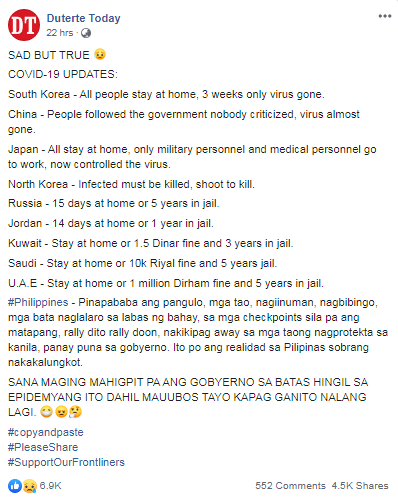 Written in a mix of English and Tagalog, the post states: "COVID-19 UPDATES: #South Korea - All people stay at home, 3 weeks only virus gone / #China - People followed the government nobody criticize, virus almost gone / #Japan - All stay at home only military personnel and medical personnel go to work now controlled the virus. / #North Korea - Infected must be kill,Shoot to kill / #Russia - 15 days at home or 5 years to jail / #Jordan - 14 days at home or 1 year to jail / #Kuwait - stay at home or 1.5 Dinar Fine 3 years to jail / #Philippines - President told to step down, people, drinking, playing bingo, children playing outside the house, at checkpoints they are angry, rally here rally there, fighting with those who protect them, always criticising the government. This is the reality in the Philippines so sad..."

But the claims are misleading.

While South Korea has dramatically reduced its number of newly confirmed COVID-19 cases, the virus has not yet been fully eradicated. On April 7, 2020, it reported 47 new COVID-19 cases, bringing the total number of confirmed cases to 10,331, the country’s Centers for Disease Control and Prevention (KCDC) stated here.

Below is a screenshot of a KCDC chart showing cases from January 20 to April 7, 2020: 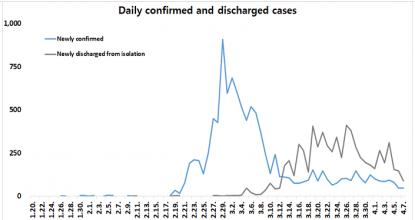 The claim that the virus is under control and that “only military personnel and medical personnel go to work” in Japan is also inaccurate.

“The number of patients is rapidly increasing in urban areas, such as Tokyo and Osaka, and medical institutions are already going through a critical moment," Japanese Prime Minister Shinzo Abe said on April 6, 2020 according to official government transcripts.

Japan also announced an emergency declaration this week in a bid to curb the spread of the virus. The declaration did not include a nationwide stay at home order. The move allows governors in seven affected regions including Tokyo to ask people to stay indoors and request that businesses close, but there are no enforcement mechanisms and no penalties for those who fail to comply.

The claim that the virus is “almost gone” in China is also misleading. While the number of confirmed cases in China has dramatically fallen, officials are now trying to stem a second wave of imported cases, AFP reported here.

Finally, the posts’ suggestion that the Philippines has been too lax in its COVID-19 restrictions is misleading. About half of the country's population have been put under quarantine restrictions. President Rodrigo Duterte recently told security forces they should shoot anyone causing "trouble" in areas that have been locked down, as AFP reported here.

Globally, more than 3.38 billion people have been asked or ordered to follow confinement measures in the fight against the COVID-19 pandemic, AFP reported here.