Skip to main content
Rohingya refugees, who landed on an isolated northern shore near the Malaysia-Thai border, huddle in a group in Kangar on March 1, 2019, following their detention by Malaysian immigration authorities. (AFP / Ismael Kamaldin)

Misinformation circulates about financial assistance for Rohingya refugees in Malaysia

Multiple text posts shared hundreds of times on Facebook and Twitter claim that the United Nations High Commissioner for Refugees (UNHCR) gives a daily allowance of 35 Malaysian ringgit to Rohingya refugees who registered with the agency. The claim is misleading; the UN agency said it provides financial assistance “under exceptional circumstances to a refugee or a refugee family with special needs” for a “limited time”, adding that the amount of money given varies on a “case-by-case basis”.

This Facebook post, which includes three photos of men sitting on the street, was published on April 28, 2020. It was shared more than 200 times. 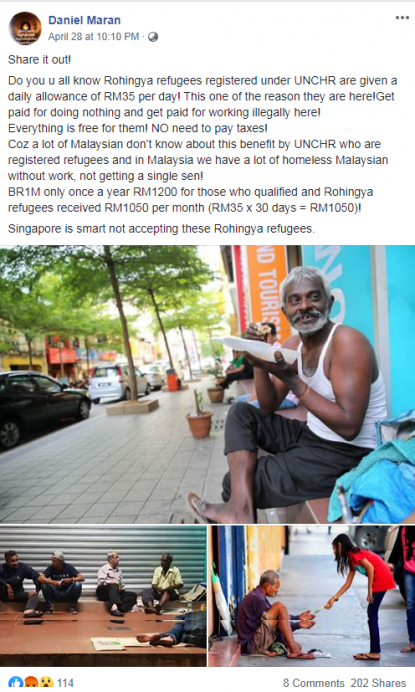 The misleading post’s caption reads: “Share it out! Do you u all know Rohingya refugees registered under UNCHR are given a daily allowance of RM35 per day! This one of the reason they are here!Get paid for doing nothing and get paid for working illegally here!

“Everything is free for them! NO need to pay taxes!

“Coz a lot of Malaysian don’t know about this benefit by UNCHR who are registered refugees and in Malaysia we have a lot of homeless Malaysian without work, not getting a single sen!

“Singapore is smart not accepting these Rohingya refugees.”

Rohingya refers to “a community of Muslims generally concentrated in Rakhine (Arakan) state in Myanmar (Burma)”.

BR1M refers to “Bantuan Rakyat 1Malaysia”, or 1Malaysia People's Aid programme, which was introduced by then Prime Minister Najib Razak in 2012 to help reduce the people’s burden from the rising cost of living. It was eventually replaced by “Bantuan Sara Hidup” (BSH) or the Cost of Living Aid programme, in 2019.

The claim was also shared more than 780 times after it was posted on Facebook here, here and here; as well as on Twitter here.

The claim is misleading; the UNHCR said it does not offer a fixed daily payment to all Rohingya refugees in Malaysia.

In response to an enquiry by AFP, a UNHCR spokesperson in Kuala Lumpur told AFP by email on May 14, 2020, that it only offers financial assistance to refugees “under exceptional circumstances” and that the “amount will vary according to several criteria”.

“If financial assistance is given it will cover a limited time, and the amount will vary according to several criteria, including the size of the family, the specific need and challenges that the family faces, socio-economic circumstances and monthly expenditure, social capital and support, and whether financial support is augmented by other types of support as mentioned.”

UNHCR Malaysia also issued an official statement here on April 29, 2020, in response to the misleading claim.

The statement reads in part: “UNHCR, the UN Refugee Agency denies the false text message that has been circulating in Malaysia in recent days, alleging that the agency provides daily cash assistance to all refugees in Malaysia.

“Assessment is made on a case by case basis by trained social workers in order to determine if a person requires financial assistance, medical assistance, or other kinds of support. Regrettably, due to very limited budget allocations, such support can only be given to very few families.”

On its website, UNHCR Malaysia states that as of March 2020, it has registered 179,520 refugees and asylum seekers in the country, including at least 101,580 Rohingyas.

Malaysia’s Ministry of Home Affairs said in this statement on Facebook on April 30, 2020, that it does not recognise the refugee status of any group.

The Malay-language statement translates to English in part as: “3. Malaysia is not party to the 1951 Refugee Convention or the 1967 Protocol Relating to the Status of Refugees thereby does not have legal or administrative framework that controls the status and rights of refugees in this country.

“4. Therefore, the Government does not acknowledge the refugees' status and has classified them as illegal immigrants (PATI) who hold UNHCR cards.

“5. Despite that, on humanitarian grounds, the Government has allowed PATI with UNHCR cards to live temporarily in this country before being placed in a third country by UNHCR on a 'case-by-case' basis.”

A reverse image search on Google found the three pictures that were uploaded in the misleading post have previously appeared in Malaysian media reports about homelessness in Kuala Lumpur and on a stock photo website. None of the reports contain any reference to Rohingya refugees.

The first picture was published by the Malaysian newspaper Malay Mail on July 8, 2014, here, with a caption that says: “Arinburagan sleeps in a field in Dataran Merdeka in the morning because he works as a car park attendant at night, and it’s too expensive to travel back to the shelter at a Hindu temple in Puchong.”

The second picture appeared in this report by Malaysian news site Free Malaysia Today published on May 22, 2019. The caption states: “Syed Omar Syed Agil chatting with a homeless person who speaks good English but is unable to get a job.”

The third picture has been taken from this photo on iStock, a photo agency based in Canada. The caption states: “Kota Kinabalu, Malaysia - January 3, 2015: Young girl gives money to a beggar on the street Kota Kinabalu in Borneo, Malaysia.”