A purported government resolution has been shared in multiple Facebook posts in June 2020 claiming that the Philippine government has approved a motion to reimpose strict lockdown measures in Metro Manila, Cebu and Laguna. The claim is misleading and has been branded by the government as “fake news”; on June 15, authorities announced Metro Manila and Laguna would remain under its current, loosened lockdown restrictions until at least the end of June.

The claim, published in this Facebook post on June 13, shows a purported list of regions in the Philippines, their corresponding COVID-19 risk levels and designated lockdown measures. 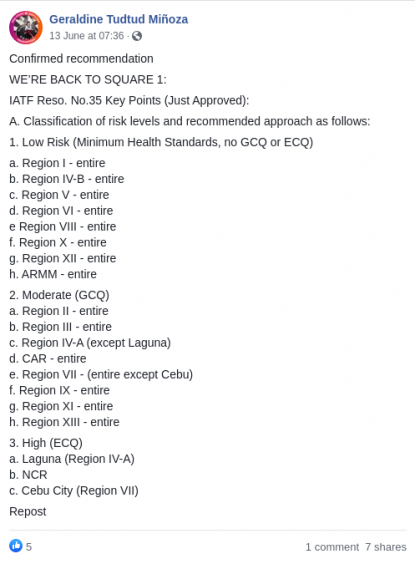 A screenshot of the misleading post taken on June 16, 2020

The claim alleges that IATF, the country’s Inter-Agency Task Force on Emerging Infectious Disease, has put three areas back under ECQ following lockdown easing in mid-May.

Those areas include the NCR, the National Capital Region commonly known as Metro Manila; Cebu, a city on the island of Cebu; and Laguna, a province southeast of the capital Manila.

On June 15, the government announced here that while Cebu would revert to ECQ, Metro Manila and Laguna would remain at GCQ until at least the end of June.

The Philippine government also published an image of the misleading claim here on its COVID-19 website with a superimposed stamp that states: “FAKE NEWS”.

The government added that the latest IATF resolution is numbered 45, not the “just approved” no. 35 as the misleading claim states. 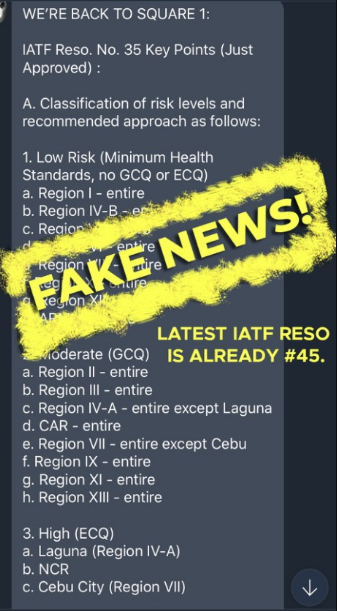 A screenshot of the photo from the Philippine government’s COVID-19 site, taken on June 16, 2020

While the document presented similar categorisation for various Philippine regions, it placed Metro Manila, Laguna and Cebu under “modified ECQ”, a slightly more relaxed version of ECQ, until at least the end of May.