A video showing larva being removed from a patient's lip has been viewed thousands of times in multiple Facebook, Twitter and YouTube posts alongside a claim that the novel coronavirus can be spread through “a worm” found in certain food and drinks. The video has been shared in a misleading context; it has circulated in reports since at least October 2019 about a parasite being removed from a person's lip, more than two months before the new strain of novel coronavirus broke out in the Chinese city of Wuhan. Indian health officials have said there is no evidence that specific food items can cause transmission of the novel coronavirus. 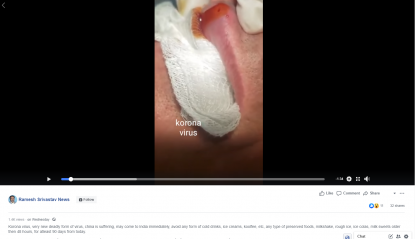 The second Hindi-language caption translates to English as: “If you eat or drink anything from the market, be careful, this is a worm that is stuck to the bottle cans and which can enter your mouth.”

“Korona virus” refers to the novel coronavirus, believed to have originated from a wildlife market in the central Chinese city of Wuhan. The viral epidemic has killed at least 490 people and infected at least 24,000 others in China since its emergence in December 2019, as reported here by AFP on February 5, 2020.

The claim is misleading; the video has circulated online in reports about a parasite being removed from a person's lip since at least October 2019, some two months prior to the novel coronavirus outbreak.

It is titled: “Removing a horrific worm parasite from someone's top lip!”

This video was also shared on YouTube here and here in October 2019 with similar titles in Spanish and Indonesian languages.

Indian health officials say there is no evidence that a specific food item can cause viral transmission and the novel coronavirus is too small to be seen with the naked eye.

During a phone conversation with AFP on February 3, 2020, a spokesperson for the Indian Department of Health and Family Welfare said the virus was “too small to be seen by the naked eye”, unlike the larva seen in the video in the misleading posts.

The spokesperson also said that there was no evidence of a direct correlation between certain food or drinks and viral infection.

“Novel coronavirus transmits when an infected person coughs or sneezes, there is no evidence that suggests it can be transmitted through cold drinks, ice creams, sweets, milkshakes, and other drinks,” he added.

The WHO has issued this guideline on Twitter for reducing the risk of novel coronavirus infection.

In outbreaks of other #coronaviruses (MERS & SARS), person-to-person transmission occurred through droplets, contact and fomites, suggesting that the transmission mode of the 2019-nCoV can be similar