A claim that all fruit and vegetable markets in the Indian city of Chennai and across the state of Tamil Nadu have been ordered to close in an effort to curb the spread of the novel coronavirus has been shared in multiple posts on Facebook, WhatsApp and Twitter. The claim is false; Chennai’s municipal authority called the social media posts “fake”, and Tamil Nadu’s chief minister said that stores selling “essential items” such as groceries are allowed to operate as normal despite a nationwide lockdown.

The purported advisory was published on Facebook here on March 18, 2020. 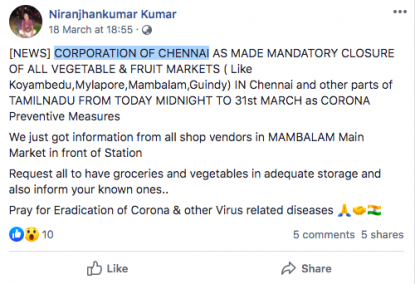 The post reads: “[NEWS] CORPORATION OF CHENNAI AS MADE MANDATORY CLOSURE OF ALL VEGETABLE & FRUIT MARKETS ( Like Koyambedu,Mylapore,Mambalam,Guindy) IN Chennai and other parts of TAMILNADU FROM TODAY MIDNIGHT TO 31st MARCH as CORONA Preventive Measures / We just got information from all shop vendors in MAMBALAM Main Market in front of Station. Request all to have groceries and vegetables in adequate storage and also inform your known ones.. Pray for Eradication of Corona & other Virus related diseases.”

Chennai's governing body, the Greater Chennai Corporation (GCC), issued a statement on March 18, 2020 denying it had issued an advisory banning all food markets.

“Due to coronavirus the Chennai corporation has ordered for crowded places like schools, colleges, offices, stadiums, bars etc to be shut. But some people are spreading rumours that grocery stores, vegetable vendors and shops selling staples will be closed. That is not true and people should not believe in those rumours," the Tamil-language statement reads in English.

Below is a copy of the statement: 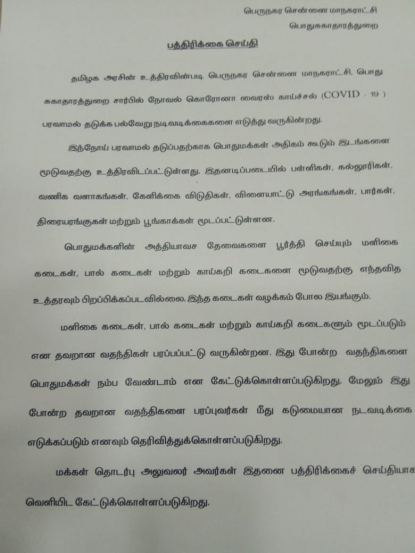 “A fake message is doing the rounds that vegetable and fruit markets will be closed in Chennai till March 31st," John tweeted on March 18, 2020. "This is a fake message and GCC has not issued any such instruction. Please refrain from forwarding such unverified messages.”

A fake message is doing the rounds that vegetable and fruit markets will be closed in Chennai till March 31st. This is a fake message and GCC has not issued any such instruction. Please refrain from forwading such unverified messages.#coronavirusindia#covidindia @srkias2012 pic.twitter.com/pBMcHX9P93

K. Palaniswamy, the chief minister of Tamil Nadu, also published this tweet on March 23, 2020 announcing a lockdown in the state and closure of certain stores. He added, however, that “the shops selling milk, vegetable, grocery, mutton, chicken & fish will continue to function in this period”.

COVID-19 was first detected in the Chinese city of Wuhan in late 2019. It has since killed more than 16,362 people and infected 375,498 others worldwide, according to data from the World Health Organization on March 25, 2020.