Skip to main content
Health workers spray disinfectant amid concerns over the spread of the novel coronavirus in Amritsar, India on March 21, 2020. (AFP / Narinder Nanu)

A purported advisory has been shared repeatedly in multiple Facebook, Twitter and WhatsApp posts that claims a disinfectant will be sprayed into the air overnight in India in an effort to kill the novel coronavirus, COVID-19. The posts urge residents to remain indoors during the spraying. The claim is false; Indian authorities said the advisory was "fake" and that no such measure had been announced. 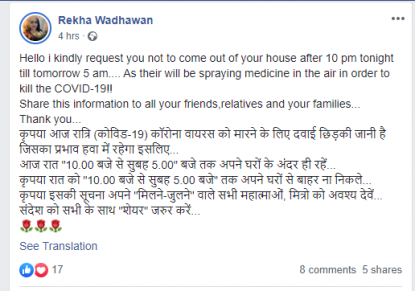 The text reads as: “Hello i kindly request you not to come out of your house after 10 pm tonight till tomorrow 5 am.... As their will be spraying medicine in the air in order to kill the COVID-19!!
Share this information to all your friends,relatives and your families...
Thank you…”

A Hindi translation of the text is also included in the post.

The central government’s official Press Information Bureau (PIB) posted a statement on Twitter on March 17, 2020 to debunk a similar false claim, which urged residents to stay indoors at night while the government sprayed “vaccine gas” from airplanes.

“NO such action has been planned out by the Indian Government,” the PIB tweet stated.

“Dear Citizens, don’t fall prey to rumours on Whatsapp & other Social Media platforms. #BBMP has no plans to spray any medicine for #COVID19. The best medicine is to stay away from rumours!.” Kumar wrote in a tweet on March 18, 2020. BBMP refers to Bengaluru’s municipal corporation.

Dear Citizens, don’t fall prey to rumours on Whatsapp & other Social Media platforms. #BBMP has no plans to spray any medicine for #COVID19. The best medicine is to stay away from rumours!

The mayor of Bengaluru also posted a similar message here on his official Twitter calling the claim a “rumour.”

The Chhattisgarh government also posted a tweet here from their official public relations account calling the advisory “fake.’’ The tweet translates to English as: “This piece of news is completely misleading. Be Aware of such false messages and rumours.”

The COVID-19 pandemic has so far infected over 300,000 people worldwide, AFP reported on March 22.