An image of an X-ray has been shared repeatedly on Facebook, Instagram and in online forum posts in October 2019 alongside a claim it shows a female Hong Kong protester’s broken legs after she was hit by a taxi at a demonstration on October 6, 2019. The image is being shared in a misleading context; a reverse image search found the same image has circulated online since at least in 2017 in online articles and posts about unusual X-rays.

The image was published here by a Facebook page with more than 900 followers. 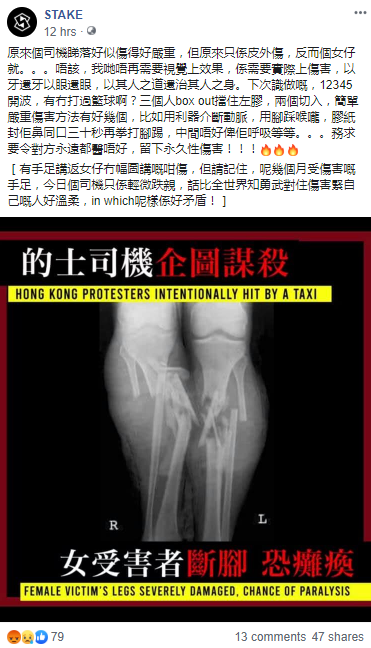 A caption in traditional Chinese language characters alongside the Facebook post translates to English as: “The driver looks severely injured, but it’s just skin injury, while the girl was...Come on, we don’t need a visual look anymore, but real hurt, to treat people the same way as we are treated. Next time should be smart, 12345 kicks off, have you played basketball before? Three people box out on the left side, the other two cut in. Easy but serious injury can be made by many ways, for example cutting off the artery with sharp tools, stepping on the throat with feet, sealing one’s nose with glue paper for 30 seconds, then punching and kicking without letting one breathe and so on. Make sure that the person will never recover, leaving some permanent damage!!!

“(There are protesters who said the girl is not injured as severely as what the picture shows, but please remember, the injured protesters over these months, while today this driver is only slightly hurt, and let the world know the hardline protesters acted so gently to those hurting them, in which this is so contradictory!)”

The post references an incident at a pro-democracy protest in Sham Shui Po on October 6, 2019, in which a taxi driver drove his vehicle into protesters.

Hospital authorities said three people were taken to hospital in a serious condition after the crash. Here is an AFP report about the protests on October 6.

But the image is being shared in a misleading context; it has circulated online since at least 2017 as a stock X-ray image.

A reverse image search on Google found it was published in this January 11, 2017, post on Pikabu, a Russian-language news and discussion website, by user VinylDJ.

The post’s Russian-language headline translates to English as: “Unusual and scary x-rays”.

Below is a screenshot comparison of the misleading picture (L) and the image from Pikabu (R): Below is a screenshot of the image on Pinterest: Screenshot of the image

On October 7, 2019, a spokesperson for Hong Kong’s Hospital Authority told AFP by phone that of the 30 people, aged 13-92, admitted to hospital after the protests on October 6, three were in a serious condition, 16 were stable and others were discharged or condition was unknown.

The condition of the pedestrians involved in the Sham Shui Po crash was “unknown”. The taxi driver’s condition was “stable” as of late October 7, 2019.