An image has been shared thousands of times in multiple Facebook posts published in December 2019 that purports to show Sri Lankan President Gotabaya Rajapaksa taking a selfie in front of a man sleeping on a desk. The image was shared soon after President Gotabaya initiated a series of unannounced visits to government departments and agencies in order to inspect public servants’ productivity and efficiency. Some social media users who commented on the posts appeared to believe the image was genuine. But the image has been doctored;  the image of Gotabaya has been cut out and mirrored from a selfie he shared on his Twitter account in November 2019; the photo of the sleeping man was posted by a Sri Lankan blogger in 2012.

It purports to show Sri Lankan President Gotabaya Rajapaksa in the foreground and a sleeping on a desk in the background. The post has been shared more than 6,400 times. 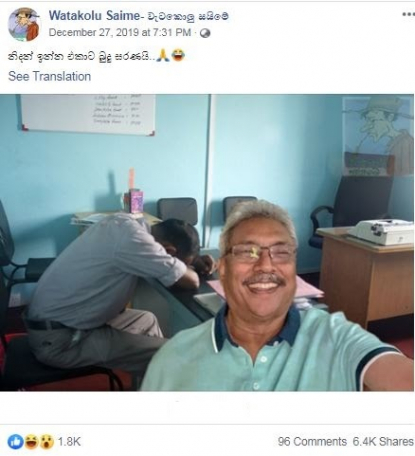 The Sinhala language caption translates to English as: “May Buddha’s blessings be with the one who is asleep”.

The same photo was published on Facebook here, here and here with a similar claim.

This image was shared just days after President Gotabaya Rajapaksa conducted a series of unannounced visits to several government agencies and government-run facilities in a bid to observe the efficiency of public servants.

Here is a government press release published on 27 December, 2019 about two of his recent visits to government agencies.

Some social media users appeared to believe the image in the misleading posts was genuine. One Sinhala-language comment translates to English as: “This dog should be fired”.

Another user’s comment translates to English as: “In which office did this happen? Awesome”.

Another user suggested the employee must have taken a nap in the office. The comment translates to English as: "Looks like he had lunch and fell asleep in office".

But the image has been doctored to include the photo of the man sleeping, which was posted by a Sri Lankan blogger in 2012.

YMBA refers to the Young Mens Buddhist Association, a community center in Colombo.

Below is a screenshot of the image published in the blog: 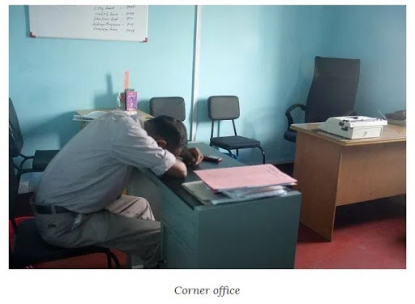 Screenshot of the image published in the blog

Below is a screenshot comparison of the image in the misleading posts (L) and the photo published on the blog (R):

Gotabaya’s selfie was published on his Twitter account here on November 25, 2019 with the caption: “A relaxing time with family on the weekend #familymoments”.

A relaxing time with family on the weekend #Familymoments pic.twitter.com/dX44OiEQFm 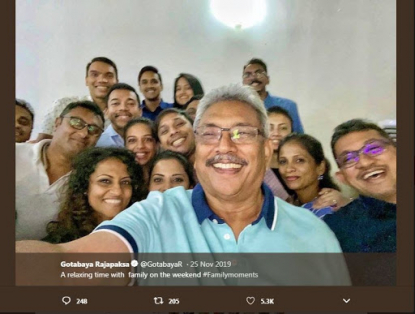 Screenshot of the image.

In the misleading posts, Gotabaya’s selfie has been cut out, mirrored and superimposed onto the image of the man sleeping at a desk.