This image of Narendra Modi has been doctored

An image shared across multiple Facebook and Twitter posts which claim that it shows Indian Prime Minister Narendra Modi wearing a traditional Arab keffiyeh during his visit to Saudi Arabia. The claim is false; the image has been doctored to add the headdress.

Translated, the Hindi-language caption reads: “Another Hindu heart emperor who became a monk in Kedarnath has today become an Arab. Every day is a new drama and a new character.” 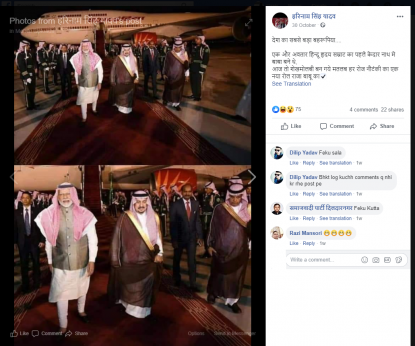 Kedarnath is located in north India and its temple is considered sacred in the Hindu religion.

Modi visited the temple in May 2019 to pray while dressed as a monk, as reported here.

The claim is false; the image has been doctored to add the traditional keffiyeh headdress.

Modi visited Saudi Arabia on October 29, 2019. His tour of the country was reported by AFP.

The original photograph used in the manipulated image is one of four photos published on Twitter by Modi’s office on the day of his arrival.

The Prime Minister landed in Saudi Arabia a short while ago. pic.twitter.com/l6WSNbsh7U