A photo has been shared in multiple Facebook and Twitter posts which claim it shows the Golden Temple in India’s Amritsar decorated with flying lanterns ahead of Diwali festival. The claim is false; the image has been created by merging two photographs -- one of sky lanterns from a Thai festival, and one of the Golden Temple.

"Golden Temple" refers to the Sikh shrine Sri Harmandir Sahib in the north Indian city of Amritsar in Punjab state. 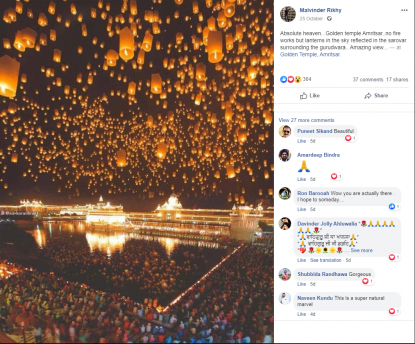 The claim is false; the image was digitally created by merging two photographs.

A watermark @navkaranbrar1 can be seen on the image.

Below is a screenshot of the image highlighting the watermark: 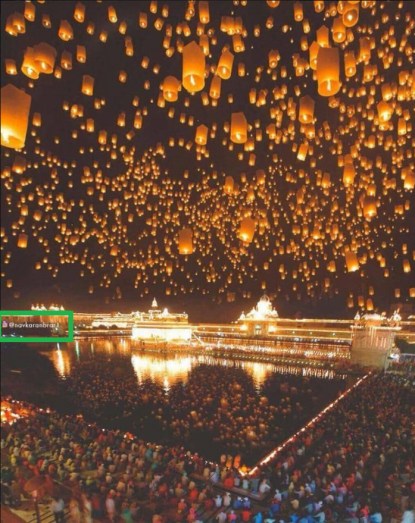 (Screenshot of th image with watermark)

A user called Navkaran Brar, who describes himself on his profile as a visual artist, posted the image here on Twitter on October 20, 2017.

The tweet states: “#HappyDiwali2017 #goldentemple picart by me If you are going to post this then please give proper credit #amritsar (Copyright)."

Another tweet from the same account the following day states: “Overall work is by me, not by someone else & yes it’s editing & not real I’ve created art not made fool of anyone , thnx."

Overall work is by me 🙏🏼 not by someone else & yes it’s editing & not real I’ve created art not made fool of anyone , thnx🙏🏼😊 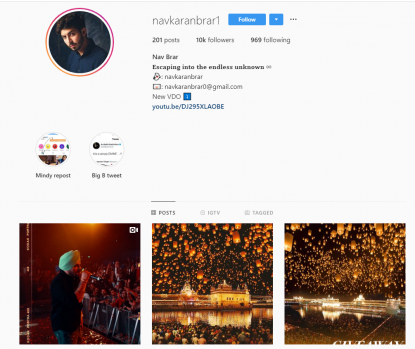 The first image was posted here on his Instagram page on October 19, 2017.

Diwali is the Festival of Lights. On Diwali, you will see every town, city and village is lit up with thousands of lamps everywhere. But the celebration is not just about lighting lamps outside – an inner light has to come. Light means clarity. Without clarity, every other quality that you possess will only become a detriment, not a gift, because confidence without clarity is a disaster. And today, too much action in the world is performed without clarity. Without the necessary clarity, whatever you try to do will be a disaster. Light brings clarity to your vision – not just in a physical sense. How clearly you see life and perceive everything around you decides how sensibly you conduct your life. Diwali is the day when the dark forces were put to death and light happened. This is also the predicament of human life. Like the dark clouds which brood in the gloomy atmosphere, not realizing that they are blocking the sun, a human being does not have to bring any light from anywhere. If he just dispels the dark clouds that he has allowed to gather within himself, light will happen. The Festival of Lights is just a reminder of that. ~Sadhguru #Imagination artwork #goldentemple #diwali #harimandirsahib #sikhtemple #sikh #sikhism #bandichordivas #chineselanterns #imagination #adoberisingstars #sikhexpo #happydiwali #instagram #enter_imagination #photoshop_creative #ps_fantasy #indianphotography #indianphotographyclub #bestvacations #ngtindia #navkaranbrar #discoverearth #WHPlikealocal #artingoutloud #theweekoninstagram

A reverse image search on Google found the two separate photographs used to create the misleading image had circulated online for years.

The image of the Golden Temple was posted online here in November 2012.

Below is a comparison showing the composite image (L) and the photo from the Thai festival (top right) and India’s Golden Temple (bottom right): 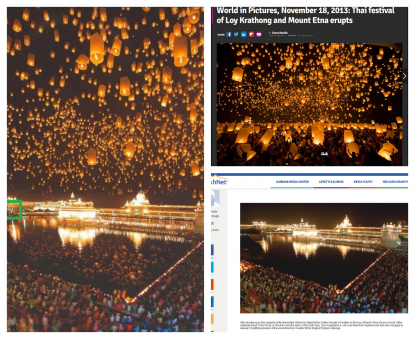 How Google Maps images show that this truck overturned in Brazil, not South Africa