A photo has been shared in multiple news articles and social media posts in January 2021 alongside a claim it shows a woman who was arrested in Mexico after stabbing her husband. The claim is false: the image has circulated online since 2019 in reports about a woman arrested in Argentina for the abuse and murder of a child. In September 2019, the Argentine navy said it had detained the woman in Buenos Aires. She was given a life sentence in 2011 for "rape, torture and death of a minor" and subsequently went on the run in 2012, the navy said in a statement.

The image was published on Twitter here on January 26, 2021.

“A woman in Mexico discovered some photos of a younger woman with her husband so she stabbed him in a jealous rage!” the tweet reads.

“The problem was that they were photos of her when she was younger.” 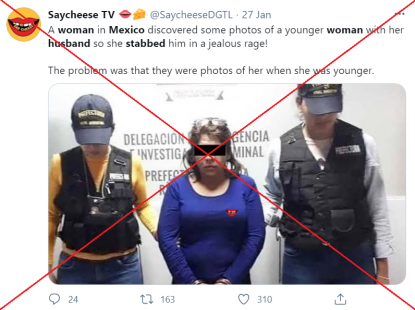 Major tabloid newspapers New York Post and Britain's Daily Mirror published the photo alongside a claim it shows a woman in Mexico who stabbed her husband. It also circulated on Twitter in various languages, including Portuguese and Indonesian.

A keyword search found the photo was published by Argentina’s Naval Prefecture on its Twitter account on September 26, 2019.

“We have caught one of the most wanted women in the country,” the Spanish tweet reads. “A nurse, she was given a life sentence in 2011 for the rape, torture and death of a minor during a satanic ritual in Mercedes, Corrientes in 2006”.

The woman, who had been on the run since 2012, was arrested in a suburb of Buenos Aires on September 25, 2019, the Argentine Naval Prefecture said in a statement. The statement included the same photo of the woman shared in the misleading social media posts.

The woman was wanted for murder “with cruelty, treachery; sexual abuse and illegitimate deprivation of liberty,” the statement reads.

The photo was published alongside accurate reporting by Argentine national news agency Télam.

The false claim that the photo shows a Mexican woman who stabbed her husband in January 2021 appears to have originated in a Facebook post from January 23, 2021 on an unverified page called Policía Municipal.

The Department of Public Security in Sorona, the Mexican state where the posts claim the stabbing occurred, did not respond to AFP's request for comment.