Hours after Hong Kong politician Junius Ho was attacked early November at a campaign event, a composite image began circulating on Twitter and Facebook claiming to show that his assailant’s “knife” was actually a comb. The claim is false; the composite image has been created by combining a photo of the alleged weapon circulating in media reports about the attack with a product advertisement for combs on Chinese e-commerce site Taobao.

The misleading image was published here on Twitter on November 6, 2019, the same day that Junius Ho was stabbed by a man while campaigning in his constituency, as reported by AFP here.

The tweet’s caption translates from traditional Chinese to English as: “Netizens found the weapon used by the assailant to attack Junius Ho this morning is an ‘antistatic comb’ from Taobao”.

The misleading composite image in the tweet is made up of two separate images.

On the right is a photograph of the knife allegedly used in the attack which has been published in local Hong Kong media reports, for example here and here.

On the left is an image which appears to show the same implement being advertised on a product page on Taobao selling combs. Multiple simplified Chinese language keywords for comb can be seen on the product page. 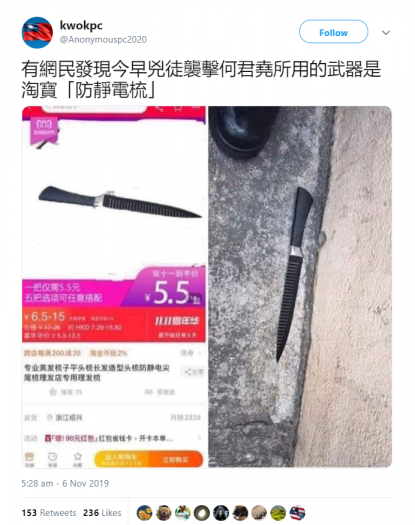 But the claim is false; the Taobao image has been doctored from a screenshot of an actual Taobao page selling combs.

A search using the product keywords from the image led to this page selling combs on Taobao.

Below is a screenshot comparison between the misleading Taobao image (L) and the comb product page viewed in Taobao’s mobile app (R): 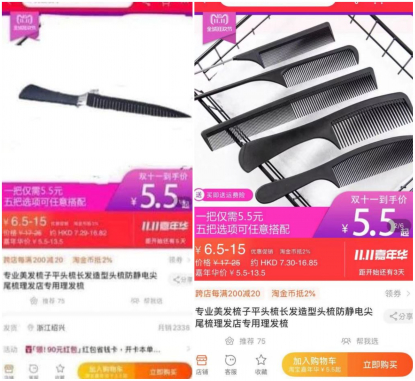 The keywords on the doctored image are identical to those on the original product page, and traces of the same background can be seen in the upper left hand corner of the image, where it has not been fully removed by photo editing software.

The knife allegedly used to attack Junius Ho can be seen in footage broadcast by Hong Kong television channel TVB here and from a different angle in images posted by Hong Kong news site hk01 here.

Below is a comparison of the knife shown in the TVB footage (L) and the hk01 photo (R):

A day after the attack on November 7, Hong Kong authorities issued a statement about the Junius Ho incident, which can be seen here.

"Police received a report that a man was attacked by another man with a knife on Wu Chui Road,” the statement said.

Junius Ho issued his own statement on the attack here on his Facebook page.

Translated from traditional Chinese to English, the statement reads in part:

"I was deliberately attacked by a knife-wielding assailant while campaigning in the Lok Tsui constituency this morning. During the incident, I was stabbed in the upper part of my left chest with a knife and was then rushed to the emergency department for treatment.

"At the moment I do not sustain any life-threatening injuries. I am currently hospitalised for further treatment and surgery."

Ho also appeared in this video uploaded to his Facebook page on the day of the attack. Speaking in Cantonese, he quoted doctors as saying he could have been "fatally injured" had he failed to react swiftly during the attack.