The image was published here on Twitter on November 10, 2020.

It also shows the logo of Sharma’s team, the Mumbai Indians, being displayed over a blue background on the Burj Khalifa, which is the world’s tallest building. 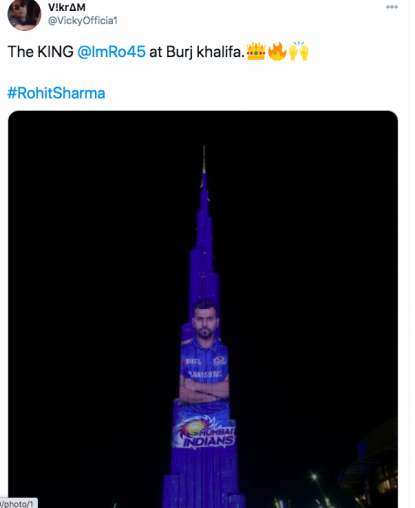 The post circulated the same day that the Mumbai Indians won the Indian Premier League title for the fifth time, as AFP reported.

Reverse and keyword searches on Google found that the original photo shows the Burj Khalifa lit up in blue with no image of Sharma or the Mumbai Indian’s logo.

Part of the report reads: “On the occasion of the 8th annual World Autism Awareness Day, Emaar Foundation joined thousands of landmarks, skyscrapers and residences across the world to mark the ‘Light It Up Blue’ campaign, with a magnificent blue illumination of the world’s largest LED-illuminated façade on Burj Khalifa.”

Below is a screenshot comparison of the photo in the misleading post (L) and news website photo (R): 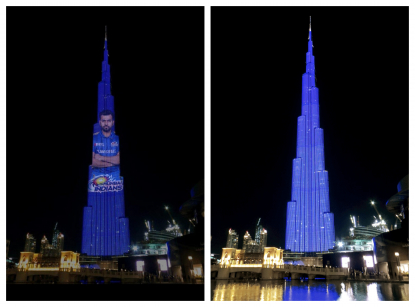 Another photo of the building lit up in blue for World Autism Awareness Day was also published on the Burj Khalifa’s official Twitter account here April 3, 2016.

Have you seen #BurjKhalifa lit up in blue for #WorldwideAutismAwarenessDay last night? pic.twitter.com/UO2UOu6HTD