Nigeria’s leading opposition party has claimed that the federal government spends over 98 percent of its budget on servicing debts. This is false: while economic indices under the current government have indeed worsened, AFP Fact Check found that less than 25 percent of the 2022 budget will be used to pay debts.

Nigeria's main opposition People's Democratic Party (PDP) made the allegations in a statement shared on social media after a meeting of its state governors on Monday January 17, 2022. The PDP claimed that the economy has drastically deteriorated since 2015 when the ruling All Progressives Congress (APC) took over. 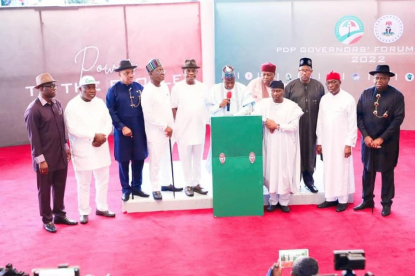 “Debt Servicing now under APC takes over 98% of the Federal budget. The tales of woe is endless (sic),” the statement posted on Facebook reads.

The post makes several other claims about the size of the economy, the price of petrol and the rise in unemployment under the APC.

Although some of the figures are correct, others have proven either misleading or false including the debt servicing figure. AFP Fact Check has debunked key claims below:

There has, however, been great concern over Nigeria’s debt-to-revenue ratio, which is said to be growing unsustainably. The International Monetary Fund mission in Nigeria said in November 2021 that “significant additional domestic revenue mobilisation is critical to put the public debt and debt-servicing capacity on a sustainable path”.

The debt servicing claim is likely a misrepresentation of the government’s revenue spending. The budget implementation report for the first five months of 2021 showed that the federal government spent 98 percent of revenue servicing debt. But that does not translate to 98 percent of the budget, as PDP claims.

A budget is a spending plan, which in this instance refers to how much a nation has earmarked for its various activities. Revenue, or income, on the other hand is how much is being made by an entity. Many nations budget more than they earn in revenue, leaving them with a budget deficit, which means they would need to take a loan to meet the requirements of their spending plan.

Nigeria became the largest economy in Africa in 2014 under the PDP after the National Bureau of Statistics (NBS) rebased the economy, as AFP reported at the time. The economy expanded to $510 billion in 2013.

The claim that the economy has worsened under the APC is largely correct.

“The PDP handed over a $550 billion economy (the largest in Africa), but under APC, Nigeria is the Poverty Capital of the world,” the statement said.

The opposition party further claims that unemployment has greatly increased under APC.

The last time the NBS released labour force statistics under the PDP (Q1 2015), the unemployment rate stood at 7.54 percent -- not 7.3 percent as the recent post claims. The party was, however, correct when it said unemployment under the APC had jumped 33 percent -- 33.28 percent precisely, according to NBS.

The PDP also alleges that the exchange rate rose from N198 per Dollar in 2015 to N500 to a Dollar and that the pump price of petrol rose from N87 per litre to N165 per litre under APC. These two claims are correct.

The Nigerian economy recently recovered from its second recession in four years. The naira has weakened, turning Nigerians to Bitcoin and other cryptocurrencies, and inflation has been in the double digits for years. The economy is set to be a key focus point in the country's next general election, scheduled for February 2023.