A post shared on Twitter and Facebook in South Africa claims the Constitutional Court ruled that unmarried couples cohabitating for three years have the same rights as people "married in community of property". This refers to a marital regime where the spouses choose to have only one estate, and all assets and liabilities are equally shared. However, the tweet is misleading: even when two people live together for three years, they are not automatically entitled to each other's estate. 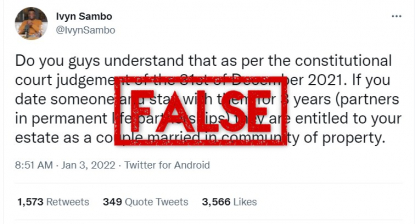 A screenshot of the misleading tweet, taken on January 17, 2022

Based on an alleged ruling by South Africa's Constitutional Court (ConCourt), "if you date someone and stay with them for 3 years (partners in permanent life partnerships) they are entitled to your estate as a couple married in community of property (sic),” the tweet reads.

The post surfaced after the ConCourt ruled in December 2021 that sections of South Africa's inheritance law for people in long-term relationships were unconstitutional. The judgment followed a legal challenge by Jane Bwanya.

According to the case file, Bwanya entered into a romantic relationship with her partner Anthony Ruch in 2014. He died in 2016, two months before their planned traditional wedding negotiations. His will bequeathed his entire estate to his mother who had passed away in 2013.

Bwaya argued that she should be entitled to claim spousal benefits as she was Ruch’s permanent life partner.

In its ruling, the court determined that Bwaya was the permanent legal partner of Ruch. “Permanent life partnerships are a legitimate family structure and are deserving of respect and, given recent developments of the common law, entitled to legal protection,” the tribunal found.

It ordered that the definition of the word “survivor”, in the Maintenance and Surviving Spouses Act and Intestate Succession Act, be read as including “the surviving partner of a permanent life partnership terminated by the death of one partner in which the partner undertook reciprocal duties of support and in circumstances where the surviving partner has not received an equitable share in the deceased partner’s estate”.

The court further ruled that the definitions of both “marriage” and “spouse” should include “a person in a permanent life partnership in which the partners undertook reciprocal duties of support” in both of the above legal acts.

The court gave the country’s parliament 18 months to make the amendments.

But the ruling does not mean that all couples who live together for three or more years are entitled to each other’s property.

According to South African law, the debts and assets of people married in community of property are blended into a single estate. In case of a divorce, the joint estate is divided equally between the partners.

The recent ConCourt ruling was specifically based on inheritance after a person in a permanent partnership dies, and did not concern community of property marriage, as the post misleadingly claims.

The ruling noted that there were fundamental differences between permanent life partnership and community of property marriage.

The court added that despite the fact that Bwaya and Ruch lived together as husband and wife, Bwaya was not legally married. Under community of property, she would not be considered married, but as the surviving partner in a permanent life partnership.

Amanda Barrat, a law professor at the University of Cape Town, also confirmed that the post was misleading.