An image of rice bags stacked onto wooden scaffolds is circulating on social media with claims that it shows the construction of fake rice pyramids in Nigeria's capital Abuja as part of a government partnership with farmers. Users accuse the local governor of building the fake pyramids to mislead people about Nigeria's rice production capacity. However, the claim is false: the photo was taken in 2018 in Ogun state, Nigeria. There is no evidence that the actual rice pyramids in Abuja were inflated with a wooden structure.

The photo started spreading days before the Nigerian government unveiled pyramids built with one million bags of Nigerian-produced rice in Abuja on January 18, 2022.  It was planted and harvested in states across the country under the Anchor Borrowers’ Programme (ABP), a government initiative launched in 2015 to provide loans to smallholder farmers in the West African country. 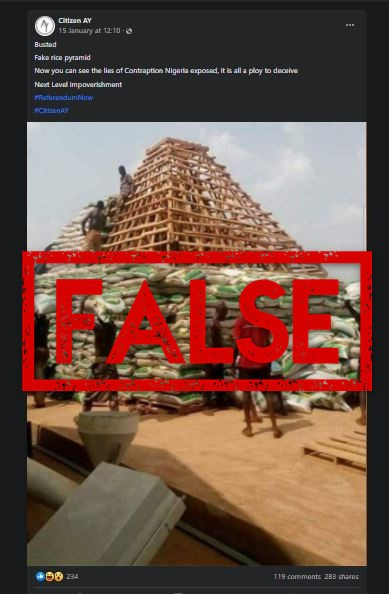 The post alleges that the photo reveals  “fake rice pyramid[s]” padded with wooden scaffolds in “a ploy to deceive” people about Nigeria’s rice production capacity.

Rice is a common staple food in Nigeria where years of supply shortfalls have fuelled appetite for foreign brands. But since coming into power in 2015, President Muhammadu Buhari’s administration has introduced curbs and increased investment through the ABP to boost local production.

Central Bank Governor Godwin Emefiele said that milling capacity in Nigeria rose to nine million metric tonnes in 2021 from 5.4 million six years earlier. Yet, the prices of locally produced rice have more than doubled over the period, official statistics show.

A reverse image search revealed that the image has been circulating online since at least January 2018 in a publication about a similar rice pyramid in Nigeria’s southern Ogun state.

There is no evidence that Abuja's rice pyramids are supported with wooden frames.

Footage and pictures of the construction of the Abuja rice pyramids were published on Facebook, Twitter and Nairaland. In these posts, men can be seen offloading what appears to be bags of rice from different trucks and stacking them onto the pyramids.

Although the authors did not mention where the footage and pictures were taken, AFP Fact Check traced the location to Umaru Musa Yar'Adua Road in Abuja.

We found that the physical features in the footage and the Nairaland pictures such as a pedestrian bridge, signboards, and electric poles match those on Google Maps. 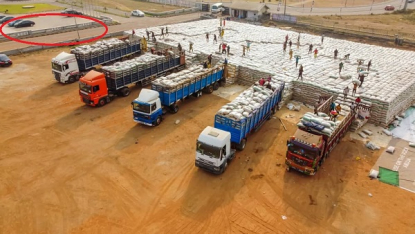 Since establishing the ABP, the Central Bank of Nigeria (CBN) has disbursed a total of 864 billion naira (US$2 billion) in loans to support 4.1 million local farmers in the cultivation of different agricultural produce, including rice.