Video of collapsing footbridge was taken in the Philippines in 2018, not in Indonesia

Footage has been viewed hundreds of thousands of times across different social media platforms after it was shared with a claim that it shows a footbridge collapsing in Indonesia’s Samarinda city. The claim is false; the video has circulated in media reports about a wooden footbridge that collapsed in Zamboanga City, the Philippines, in 2018, causing visiting government officials to fall into the water.

It shows a group of people falling into water when a wooden footbridge they are walking along suddenly gives way. 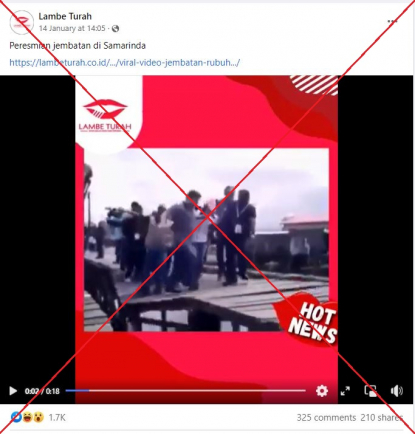 The Indonesian-language caption reads as: "Bridge inauguration in Samarinda".

Samarinda is the capital city of Indonesia's East Kalimantan province.

The same clip has been viewed more than 138,000 times after it was posted with a similar claim on Facebook here, here and here; on Twitter here; on TikTok here and here; as well as on YouTube here.

A combined reverse image and keyword search on Google found a longer video posted on Facebook by GBPI TV11, a regional TV station based in Zamboanga City, in southern Philippines, on April 26, 2018.

Translated from Chavacano, a Creole language spoken in Zamboanga City, the video's title reads as: "Wooden bridge in Rio Hondo collapsed and caused an accident among local and national government officials."

Rio Hondo is a neighbourhood in Zamboanga City in Mindanao Island.

Below is the screenshot comparison between the video in the misleading post (L) and the GBPI TV11 video (R): 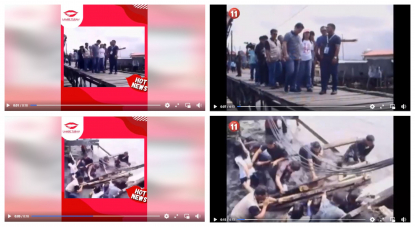 Translated from Tagalog, the video's title reads: "TV Patrol: A number of government officials fell off a bridge in Zamboanga."

Philstar and Rappler also published reports and photos of the incident.

According to the reports, the officials were inspecting a run-down resettlement project for victims of a deadly 2013 siege in Zamboanga City.