Online users have widely shared a letter attributed to South Africa's Gauteng education department announcing that only 32 percent of high school students graduated in the province in 2021. The post has received hundreds of shares on Facebook and drawn thousands of views on TikTok. However, the claim is false and the Education Department has dismissed the letter as a hoax. Officials confirmed exam results will be only be released on January 21, 2022.

The letter, bearing the emblems of the Basic Education Department and the Gauteng Department of Education, is addressed to “2021/2022 matriculants” - the term used for South African high school students in their final year.

“The Department Of Education together with the Gauteng Government are yet to announce the most devastating news about the matriculants of 2021 (sic),” the letter reads.

“Upon conclusion, calculations and severe adjustments, only 32% of matriculants seem to have passed".

The document ends with a purported quote from Gauteng Province’s education official Panyaza Lesufi, who blames "Amapiano” (a hybrid music of deep house, jazz and lounge) for “these kids failing”.

Screenshot of the forged letter shared on Facebook, taken January 12, 2022

The letter has hundreds of shares on Facebook, more than 3,500 views on TikTok and over 25,000 likes on Instagram.

But AFP Fact Check found the document to be a hoax.

“The Gauteng Department of Education strongly condemns this fake letter which has been circulating on social media regarding the pending Matric results,” he wrote. “We urge the public to regard it as fake news as it contains heavily falsified information.”

– Origins of the document –

A Facebook photo search for keywords in the document revealed one of the earliest posts on January 7, 2022 at 18:00 SAST.

Amapiano DJ Luyanda Mlonzi, better known as DJ Jaivane, posted an image of the letter on his Facebook page with the caption “What????”

The post has since garnered 4,900 reactions and more than 500 shares. AFP Fact Check contacted Mlonzi but he could not be reached for comment.

While scrolling through images of the forged letter on Facebook, AFP Fact Check noticed that a number of them were screenshots of an Instagram post by Amapiano DJ Lady Du (Duduzile Ngwenya). A search on the platform led to the original post by @ladydu_sa with more than 25,500 likes. 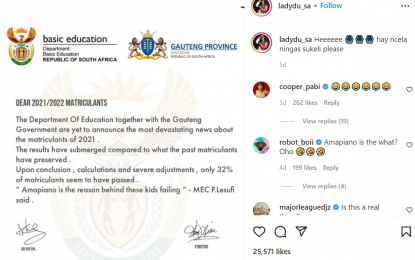 Further analysis showed the image was posted on January 7, 2022 at 16:23 – more than an hour and a half before DJ Jaivane’s Facebook post. Ngwenya has also not responded to AFP’s requests for comment.

The official matric results for this year's class will be released on January 21, 2022. This year, matriculants’ individual results will not be published in the media in compliance with the POPI Act.