A photo has circulated in Facebook posts that claim it shows Myanmar's military launching air strikes against anti-coup fighters in eastern Kayah state. The area has seen intense fighting since last year's coup. But the photo has been shared in a false context: it has circulated online since at least 2016 on Russian-language websites that reported on a joint Russian-Mongolian military exercise in eastern Siberia.

The post claims the photo shows the Myanmar military launching an air strike against anti-coup fighters in Loikaw, the capital of Kayah state that lies east of Myanmar's capital Naypyidaw.

It sarcastically tells readers to "skip the post" for those living outside Loikaw.

"This is Loikaw. Not your town. Just skip the post. #kayahstate," it reads.

Local media The Irrawaddy reported that clashes erupted between Myanmar's military and anti-coup fighters in the city on January 6, 2021 -- forcing thousands to flee their homes as the junta launched air strikes. 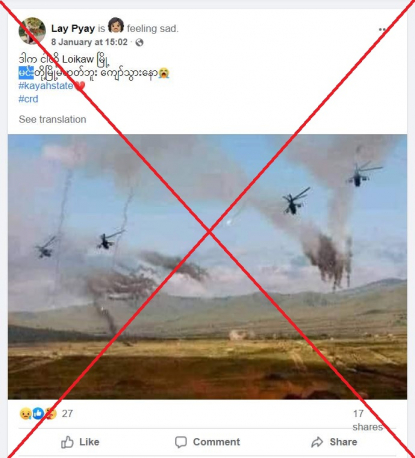 Myanmar has been in turmoil since the military seized power in February 2021, ousting civilian leader Aung San Suu Kyi and unleashing a deadly crackdown on dissent.

However, the photo predates the coup by almost five years.

Reverse image searches on Google found the photo published on August 30, 2016 in a report by Russian website Infpol.

“The joint Russian-Mongolian military exercises known as "Selenga-2016" began in Buryatia at the Eastern Military District "Burduny" training complex, the district's press service said on Tuesday. They added that the exercises will end on September 7," the report reads.

Below is a screenshot comparison between the photo shared in the misleading Facebook posts (left) and the photo published in 2016 (right): 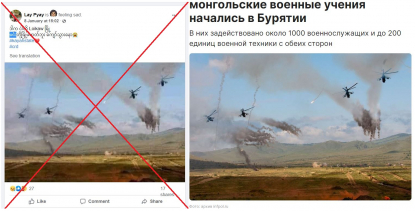 Another Russian website FlashSiberia published an identical photo on August 31, 2016 in a report about the same military exercise.

It cited this report by Russian state news agency TASS as the source of the information.

AFP has previously debunked various false claims about the conflict in Myanmar -- including here and here.