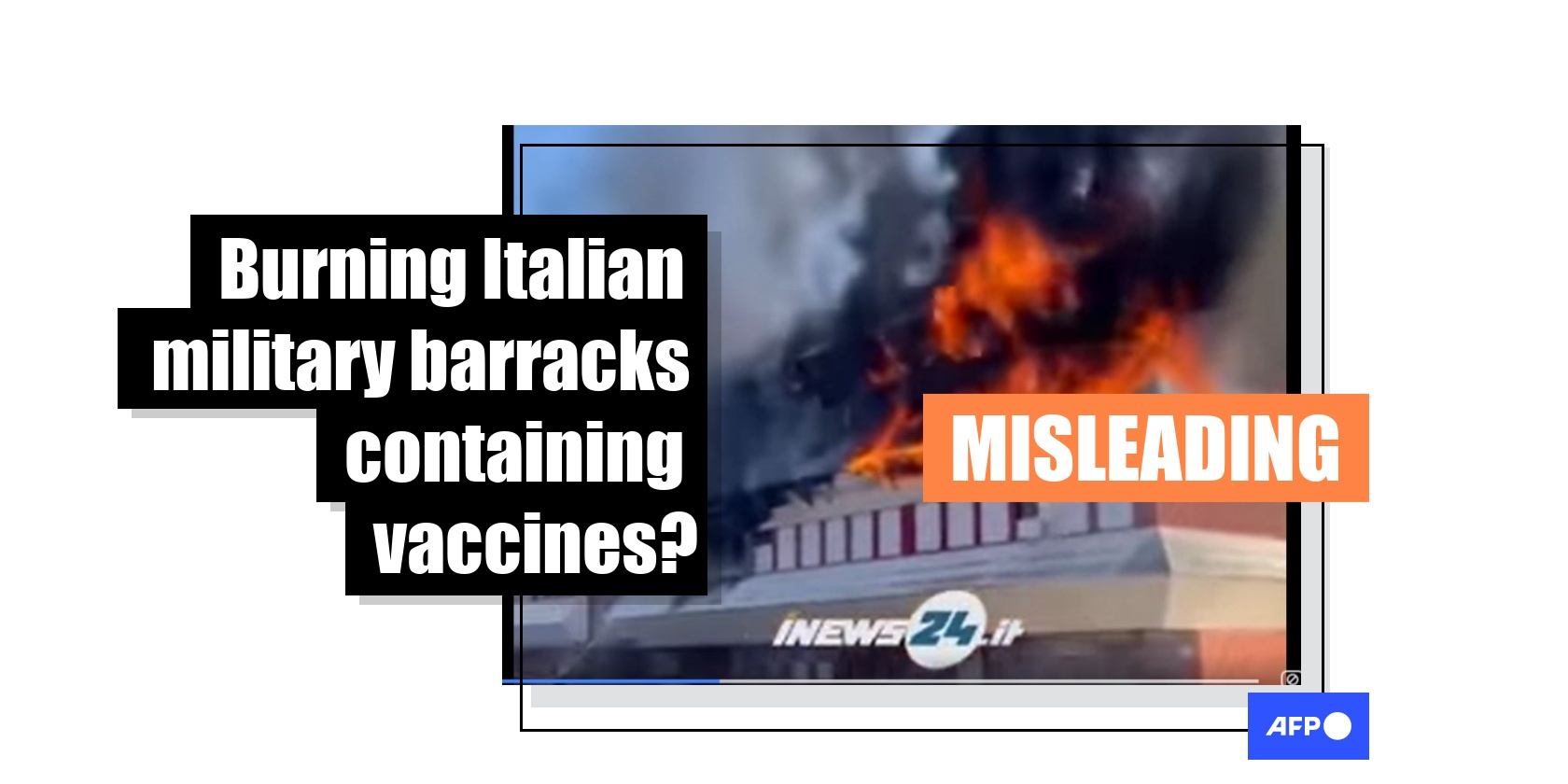 Footage of a building in flames is circulating on social media across several countries. The clip accompanies posts claiming that the fire gutted a military barracks supposedly housing Covid-19 vaccines in Italy after mandatory vaccination was approved for security forces in the country. The claim is misleading: although Italy’s first Covid-19 vaccines were initially stored at the military camp in 2020, there were no doses in the building at the time of the accidental fire, according to a Carabinieri spokesperson.

The claim started circulating online in December 2021, when the fire outbreak at the Carabinieri urban policing barracks coincided with a recent vaccine mandate for school staff, police officers, military personnel and emergency service workers, which went into effect on December 15. The measure was an extension of a similar directive already in place for Italian healthcare workers.

The accompanying footage, which contains a watermark of Italian news medium iNews24, shows a fire consuming the top floors of a building.

The English-language posts shared in Greece, the United States and the United Kingdom all have a central message that the incident was a response to vaccine mandate for security forces. The posts suggest that the supposed vaccine storage facility was deliberately set on fire to evade the mandate.

“Italy: after the mandatory vaccination for all security forces is approved, the military warehouse where the vaccines were stored magically catches fire,” reads a tweet from December 17, 2021. The author credits a post on Telegram. 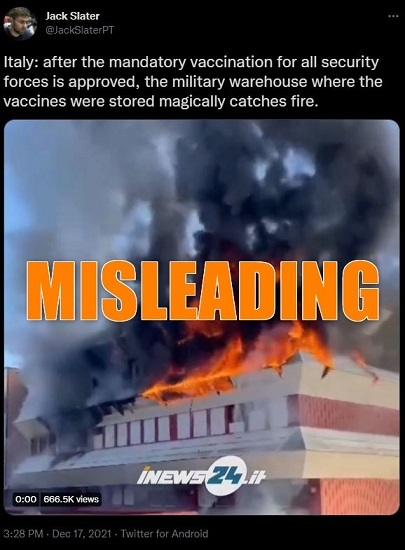 The tweet was shared by multiple users in South Africa, where a similar claim is also circulating in Zulu.

But contrary to the claim, no vaccines were stored in the building at the time of the incident. Although the cause of the fire has yet to be determined, there is no evidence that the building was deliberately set on fire in response to the mandate.

AFP Fact Check traced the footage to the YouTube page of Italian online media iNews24. The news platform reported that the footage shows a fire outbreak in a building at the Carabinieri police barracks in Rome on December 15, 2021 – the deadline for public sector workers in Italy to be vaccinated against Covid-19. The measure had been approved three weeks earlier, on November 26, 2021.

"High and black flames burst from the building of the Lazio Regiment in the Salvo D'Acquisto Carabinieri barracks at Tor di Quinto in Rome,” the caption on the video reads in English.

"According to initial information, the Carabinieri themselves raised the alarm at around 12:50 a.m., alerting the fire department's operations center, which arrived on the scene with four teams," the caption continues.

Neither iNews24’s report nor those by other Italian media (see here,here and here) mentioned Covid-19 vaccines being stored at the scene of the incident.

A Google search with the keywords “fire + Salvo D'Acquisto + Tor Di Quinto + Roma” returned several media reports (here and here) about the disaster without any reference to the storage of Covid-19 vaccine doses.

AFP Fact Check found the exact location of the incident in Rome on Google Maps Street View. Physical features such as the building in the footage match images on the map.

A Carabinieri spokesperson confirmed to AFP Fact Check that the fire broke out in a building at Salvo D'Acquisto barracks in Tor di Quinto, Rome on December 15, 2021. The barracks house several commands and specialized units of the armed forces, including the Eighth Regiment of Lazio and the Fourth Carabinieri Cavalry Regiment.

“The fire, which started by accident, affected the dormitory of the 8th Regiment,” the spokesperson told AFP Fact Check on December 23, 2021.

“There are no vaccines in the barracks," according to the spokesperson.

“When the first doses arrived at the beginning of the year, they were stored in the barracks to be distributed elsewhere afterwards, but now there is no longer any stock of vaccines in the barracks.”

Local media (here and here) reported that the first 9,750 doses of Pfizer's Covid-19 vaccine arrived in Italy in the evening of December 25, 2020, and were stored in the Salvo D'Acquisto barracks for distribution to vaccination sites.

On January 5, 2022, Italy announced that vaccination against Covid-19 would be compulsory for everyone aged 50 and older, beginning February 15, 2022, as AFP reported here.