Photo has circulated since 2001 in reports about military helicopter in Bulgaria, not Myanmar

A photo of a helicopter has been shared in multiple posts in January 2022 alongside a claim it shows a Myanmar military helicopter shot down by a rebel group. Myanmar has been in chaos since the February 1 coup which ousted Aung San Suu Kyi's civilian government. The image, however, has been shared in a false context: it has circulated in reports since 2001 about a Bulgarian air force helicopter in a domestic military exercise.

The photo was shared here on Facebook on January 9, 2022.

It has been shared more than 170 times.

The post claims the image shows a Myanmar military helicopter shot down in Daw Mu Kler village near Loikaw, the capital city of Myanmar's Kayah state.

"It is said that a military helicopter was shot down by the Karenni Nationalities Defense Force (KNDF) today at 8pm and it went down in flames near Daw Mu Kler village", reads the post's Burmese-language caption. 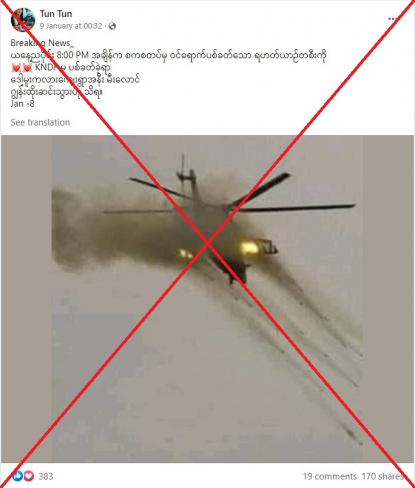 The photo circulated online shortly after some Burmese-language media reported that the KNDF had shot down a Myanmar military plane on January 8, 2022.

The attack was reported by Radio Free Asia here and DVB here on January 8, 2022.

The KNDF published a statement about the alleged attack alongside photos of various weaponry here on its Facebook page on the same day.

The image also circulated alongside a similar claim on Facebook here and here, and on Twitter here.

A reverse image search on TinEye -- followed by a keyword search on Google -- found this photograph published by Reuters news agency in 2001.

Below is a screenshot of the photo on Reuters' website:

Screenshot of the photo on the Reuters Pictures website

The caption reads: "A Bulgarian air force MI-24 combat helicopter strikes during a military exercise at the military base near village of Koren, some 160 km south from Sofia on September 27, 2001.

"Bulgaria, which borders the Black Sea, Romania, Yugoslavia, Macedonia, Greece and Turkey, NATO's most eastern member, is hoping to receive an invitation to join NATO at the alliance's summit planned for November 2002 in Prague."

Below is a screenshot comparison of the photo in the misleading post (L) and the Reuters image (R):

The photo was also posted on the stock photo website Alamy here with the same caption and credit.