A video of former US president Barack Obama shared alongside a claim that he is encouraging Kenyans to remain peaceful ahead of the 2022 general election has been viewed multiple times on TikTok. The claim is false; the video is nine years old, and it shows Obama addressing the people of Kenya before the election in 2013.

"After the turmoil of five years ago, you have worked to rebuild communities, reform institutions and passed a new constitution. Now Kenya must take the next step in March with the first national elections under your new constitution," the 44th US president said in the video.

“We all know what makes for a successful election. Kenya must reject intimidation and violence and allow a free and fair vote. Kenya must resolve disputes in the court, not in the streets. Above all the people of Kenya must come together before and after the election to carry on the work of building your country,” Obama said. 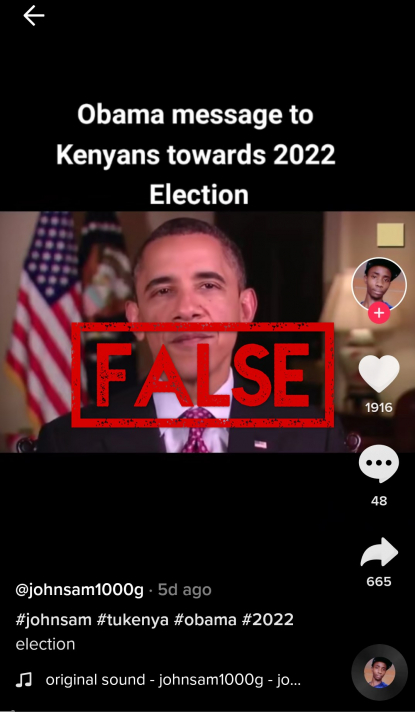 But the video is old, and Obama is not addressing Kenya’s August 2022 general election.

The video was recorded nine years ago, when Barack Obama was still president of the United States, before Kenyans went to the polls in 2013 (see here and here).

Kenya’s 2013 elections were significant as they were the first general elections after 2007/2008 post-election violence, which left more than 1,100 people dead and at least 600,000 others displaced. The 2013 election was also the first under the new constitution the East African country had adopted.

Obama's 2013 video referenced this development, noting they are the "first national elections under your new constitution".

While Kenyans will be heading to the polls to elect their fifth president on August 9, 2022, there is no evidence on any of Obama’s official media platforms that he has commented on the upcoming election.

Veteran Kenyan politician Raila Odinga announced on December 10, 2021, that he would make his fifth bid for the presidency in next year's election, ending months of suspense following a surprise truce with his former foe, President Uhuru Kenyatta, as AFP reported.