A video that shows a woman dragged by several men towards a car has been viewed tens of thousands of times in social media posts that claim she is a Hindu who was made to convert to Islam for a forced marriage in Muslim-majority Pakistan. But the video has been shared in a misleading context; it has previously circulated in reports about a woman being assaulted in public after attempting to divorce her husband. Local police told AFP everyone involved in the "domestic feud" was Hindu.

The video was shared here on Instagram on December 23 by Op India, a right-wing media organisation. 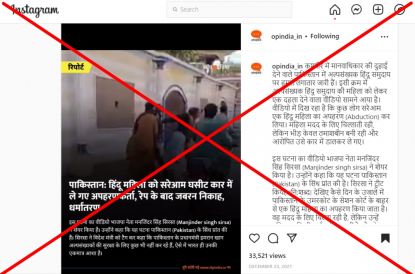 Hindi-language text overlaid on the video reads: "Pakistan: Kidnappers dragged a Hindu woman inside a car in broad daylight to rape her, force her into marriage and convert her [to Islam]."

Local media in both India and Pakistan have previously reported on cases of Hindu women in Pakistan being abducted and forced to convert to Islam for forced marriages.

The video circulated online after Manjinder Singh Sirsa -- a member of India's ruling Hindu nationalist Bharatiya Janata Party -- shared the footage alongside a similar claim on Twitter on December 21, 2021.

But the video had been shared in a misleading context.

In response to the misleading posts, Atta Mohammad, the officer in charge of the case in Sindh province, told AFP the video shows Hindus involved in a "domestic feud".

"The family members fought with each other; one suspect is under custody and four others have been granted bail by the court," he said.

Local news reports said the video shows a woman being assaulted after she filed for divorce.

A keyword search found the video was published in this Urdu-language report by Pakistani media organisation Geo News on December 20, 2021.

"In Umerkot, a woman who came to a local court to get a divorce was publicly humiliated", reads the report's headline.

The news anchor states: "In Umerkot, a woman was grabbed by the hair and dragged in public. The perpetrators grabbed the woman by her hair, forced her into a car, and escaped.

"According to the police, the woman came to a local court to get a divorce from her husband. Police freed the woman and have arrested a suspect."

Umerkot is a Hindu-majority district in Pakistan.

The report does not state the woman was abducted and forced to marry a Muslim, as claimed in the misleading posts.

Below is a screenshot comparison of the video in the misleading posts (L) and the video published by Geo News (R):

The incident was also reported by Dawn newspaper here on December 21.