This video shows an earthquake that struck Indonesia in 2009, not in 2021

A video has been viewed hundreds of thousands of times on Facebook and TikTok alongside a claim that it shows a 7.5-magnitude earthquake that struck eastern Indonesia on December 14, 2021 — causing panic but no deaths or major damage. The claim is false; the clip has circulated online since 2009 in reports about an earthquake hitting Indonesia's West Sumatra province.

It shows people panicking on the street as a nearby structure collapses. 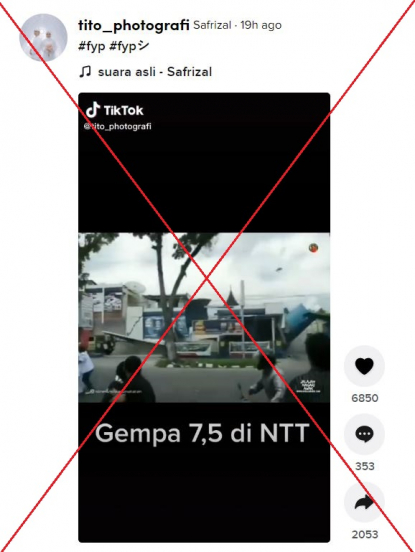 The Indonesian text overlaid on the video reads as: "7.5 [magnitude] earthquake in NTT".

NTT refers to East Nusa Tenggara, a province in the eastern part of Indonesia.

The same video has been viewed more than 33,000 times alongside a similar claim on Facebook here, here and here; as well as on TikTok here and here.

A reverse image search on Yandex followed by keyword search found this longer video posted on YouTube on October 9, 2009.

The Indonesian-language title translates as: “Amateur Video During the 2009 Padang West Sumatra Earthquake”.

An old logo of Indonesian broadcaster Trans TV is also visible throughout the footage.

Below is a screenshot comparison of the clip in the misleading posts (L) and the 2009 video on YouTube (R): This video report, posted by Padang-based news outlet Harian Haluan on its YouTube channel on September 29, 2019, includes a short clip of the 2009 earthquake.

An identical scene can be seen at the video's 18-second mark.