A photo shared thousands of times around the world appears to show a billboard featuring New Zealand Prime Minister Jacinda Ardern inviting Kiwis to get a "Christmas booster [jab]" in exchange for "up to six months' worth of freedoms". The claim circulated online shortly after New Zealand said it would not reopen to foreign travellers until at least the end of April 2022, as it slowly relaxes some of the world's toughest pandemic border restrictions. But the image has been digitally manipulated from an old election advert. The New Zealand Prime Minister’s office told AFP the image was a “fake”.

“Don't forget to book your Christmas booster! Each booster gives you up to six months of freedom!” read bold red letters on a billboard, alongside a photo of Ardern.

The sign also features the slogan "No Jab, No Job, no refunds," suggesting vaccination is necessary to work in the country.

The poster has been shared thousands of times by Facebook users based in New Zealand, Romania, Portugal, and the Netherlands.

This post from an Australia-based user states: “They're not even hiding the Authoritarianism in NZ anymore”. 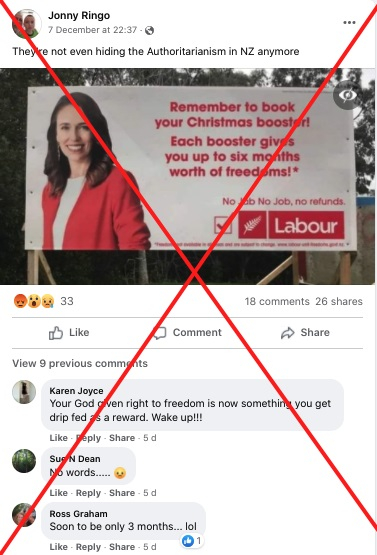 New Zealand said on November 24, 2021 that it would not reopen to foreign travellers until at least April next year, as it slowly relaxes some of the world's toughest pandemic border restrictions, AFP reported here.

Its previous strategy of eliminating the virus completely has resulted in just 47 deaths in a population of five million.

The image, however, is a fabrication.

It was shared under the title “Labour Party – 2020 General Election”.

The poster features the same image of Ardern as in the fabricated adverts, alongside the slogan "Let's Keep Moving".

Advertisements featuring the slogan “Let’s Keep Moving” were used in the lead-up to New Zealand’s October 2020 election by Jacinda Ardern’s Labour party -- months before Covid-19 vaccines were available in the country.

Other examples of the slogan being used in advertisements can be seen here and here, as well as an example of the original billboard here.

In response to questions over the authenticity of the billboard offering freedoms as a reward for booster shots, a spokesperson for the Prime Minister’s Office told AFP: "The billboard is fake."

The manipulated image circulated online as Covid-19 vaccine booster shots were being administered globally to increase protection against the disease.

Countries with sufficient vaccine supplies -- including New Zealand -- have encouraged their populations to receive a booster jab to fight the Omicron coronavirus variant, AFP reported

Omicron -- first discovered in South Africa last month -- is more transmissible than the Delta strain of the virus and reduces vaccine efficacy but causes less severe symptoms according to early data, the World Health Organization (WHO) has said.

The New Zealand Ministry of Health writes on its website here that anyone aged 18 or older is eligible for a booster vaccination 6 months after they have completed their primary vaccination course.

However, according to the website, booster shots are not needed to secure any kind of "freedoms" -- contrary to the fabricated billboard circulating on social media.

"Booster doses are not required (...) to obtain a vaccine status certificate used to access events, gyms, churches, hairdressers and other services and buildings,” the Ministry of Health's website states.

Some essential workers must be vaccinated in order to keep their positions, as outlined on the New Zealand government's website here.