Skip to main content
A man checks a defibrillator in Broadstairs, southeast England, on May 28, 2020 ( AFP / Ben Stansall)

Social media posts claim a decision by Canada's Nova Scotia to equip public schools with defibrillators is linked to rare side effects of Covid-19 vaccines. But the provincial government said the move is unrelated to the pandemic, and a Canadian foundation said efforts to make the life-saving devices accessible in public buildings, including schools, have been ongoing for more than a decade.

"Parents, if you get your kids jabbed you need your head examined. You will be making a very grave error, one you can't undo! Kids ARE NOT AT RISK of the v:rus!" says a November 25, 2021 Instagram post that includes a screenshot of CBC News article headlined: "Nova Scotia putting defibrillators in all public schools." 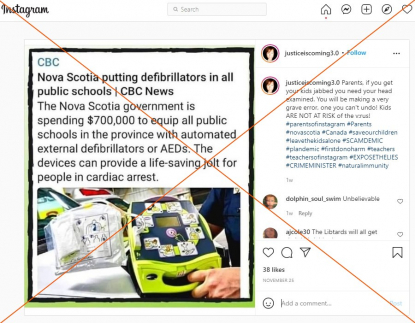 Posts making similar claims appeared on Twitter and Facebook, where one post says: "Any gatherings at night in the schools are vaxxed only. They literally think we are stupid. Schools have always been used in the evening for adult classes but we didn't need defibrillators until now."

The posts, which follow waves of inaccurate claims about vaccines, circulated after the Canadian government authorized the Pfizer-BioNTech Covid-19 shot for children aged five to 11.

However, Jenna MacQueen, spokeswoman for Nova Scotia's Department of Education and Early Childhood Development, told AFP that the move to equip all public schools with automated external defibrillators (AEDs) "was in no way tied to the Covid-19 pandemic."

She said the program has been in place for more than a decade, and at the time of the March announcement "about 70 schools already had AEDs."

The push reflected the wishes of the community, MacQueen said, adding: "Schools are the heart of a community and are often used by community groups before and after school hours. It's important that Nova Scotians feel confident that when they are in our schools that they are safe and can access a life-saving AED in the event of a cardiac emergency."

This was echoed by Canada's Heart and Stroke Foundation, which told AFP: "Cardiac arrest can happen to anyone, at any age, any place or time. Doing CPR keeps the blood circulating, but only an AED can restart a heart by administering an electrical shock that causes it to resume its natural rhythm."

"Placing AEDs in schools benefits students, but it also benefits a mixed-age population of teachers, support staff and the local community," the organization said.

Rare cases of heart inflammation (myocarditis and pericarditis) following vaccination with mRNA-based jabs such as Pfizer-BioNTech's or Moderna's have been reported in Canada and elsewhere. Canada's National Advisory Committee on Immunization (NACI) said that when a case occurs it is usually within a week of receiving a shot.

Heart issues are more often associated with the second dose of the vaccine, and were observed in males aged 12-29 more than females or older people, but the Canadian government says most cases are mild and patients recover quickly.

The NACI recommends that Canadians under age 30 receive the Pfizer vaccine over Moderna's jab. Only the Pfizer shot, administered at a lower dosage, is authorized for children under age 12.

Health Canada says: "The risk of cardiac complications, including myocarditis, has been shown to be substantially increased following SARS-CoV-2 infection, and that it is higher following infection than after vaccination."

In a July statement, Nova Scotia's chief medical officer of health Robert Strang, said: "When it comes to the Pfizer and Moderna vaccines, the benefits of getting vaccinated far outweigh the risk of myocarditis and pericarditis."

AFP Fact Check previously examined false claims about the risk of heart inflammation following a Covid-19 vaccine. The study by the University of Ottawa Heart Institute was withdrawn and its authors said incorrect data "vastly" inflated the incidence of post-vaccine myocarditis.