A video has been viewed millions of times in posts that claim it shows Russian special forces smashing people's televisions at their homes as part of an "anti-fraud" crackdown intended to protect them from broadcasts. But the video -- which some social media users believed shows a genuine incident -- has been shared in a misleading context.  The video was originally published on a satirical YouTube channel, which consistently produces videos that poke fun at Russian officials.

The video was posted here on Chinese social media platform Weibo on November 3, 2021.

As of December 10, it has received more than 2.9 million views.

It claims that Russian special forces have taken drastic "anti-fraud" measures in order to protect residents.

"#See how hardcore the Russian anti-fraud action is!#", reads the simplified Chinese-language caption. 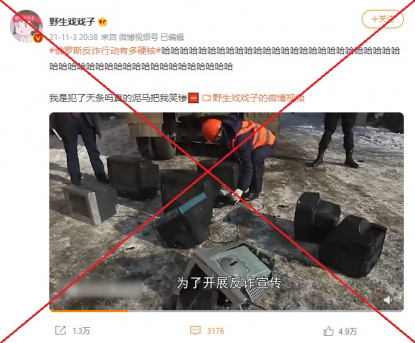 A screenshot, taken on December 9, 2021, of the misleading post

The footage appears to show a group of masked policemen smashing television sets after barging into residents' homes.

The post circulated online as several investigative news outlets, journalists and rights organisations in Russia have been hit with cases that observers have described as a historic crackdown on independent organisations. AFP reported on the development here.

Comments from some social media users indicated they believed the video shows a genuine police crackdown.

"That's great, directly go straight to the point", one user commented on Weibo.

Another commented: "And that's how you can cure the fraud problem from the source".

The satirical video, however, has been shared in misleading context.

A reverse image search on Google shows that the original video was posted on January 26, 2021 on a YouTube channel called "BARAKuna", which has more than 827,000 subscribers.

The bald man in the circulated video is played by Andrei Neretin, the founder of the satirical YouTube channel "BARAKuna".

According to media reports, Neretin is a former journalist and he plays the fictional politician called Vitaly Nalivkin in the channel to mock local authorities' inability to respond to citizens' problems.

Comparison of Andrei Neretin’s profile (L) from a Reuters report and the screenshot of his YouTube channel (R) taken on December 9, 2021

Neretin faces up to eight years in jail after being charged with "hooliganism", Reuters reported on November 24, 2021.

According to its producer Andrei Klochkov, the probe is related to one of the series' episodes posted in September, in which the main character of the show shoots a grenade launcher but misses the target and hits a campaign billboard of the ruling United Russia party.

AFP Fact Check debunked a similar satirical video in October produced by the same channel that was shared alongside a false claim about "forced vaccinations".