Skip to main content
A healthcare worker administers a dose of Russia's Sputnik V Covid-19 vaccine at a vaccination centre in the GUM State Department store in Moscow on October 21, 2021 ( AFP / Dimitar DILKOFF)

A video has been viewed millions of times in social media posts that claim it shows a mandatory vaccination campaign in Russia. The claim is misleading; the footage was taken from a satirical video that makes fun of Russian bureaucracy. Covid-19 vaccination is only compulsory for certain key workers in Russia, as of October 28.

"In Russia, those who refuse to get vaccinated will receive a home-delivery vaccination service from the Russian special forces," reads the simplified Chinese title of a video posted on June 1 on video-sharing platform Bilibili.

The footage, which has been viewed more than 2.5 million times, shows a group of men in black balaclavas knocking on a door, before barging into a man's home. One of the men draws a syringe before apparently injecting him. 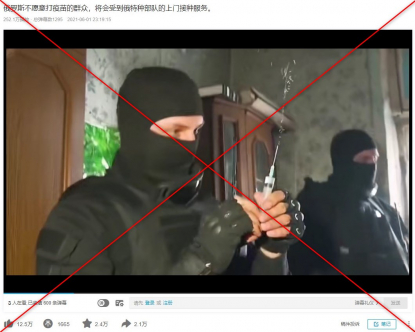 "People seem to be cooperative with the home-delivery service," one person commented.

Others commented: "Who can refuse this home-delivery service from the special forces?" and "You have to get vaccinated even if you don't want to".

Covid-19 vaccination in Russia is voluntary, except for workers in certain sectors such as healthcare, hospitality and education.

A reverse image search on Google found a longer version of the video posted on February 22 on YouTube channel "BARAKuda", which has more than 780,000 subscribers.

The clip circulating on social media starts at the 0:30 mark.

Vitaly Nalivkin is a fictional politician created as part of a satirical series that pokes fun at local authorities, The Moscow Times reported.

One video in the series shows Nalivkin hanging air fresheners across town to "reduce the bad smell".

"Vitaly Nalivkin is a collective character, we think over the script, write the text, work out all the scenes, agree on filming, after we shoot everything, we edit and post," the director and producer of the series, Andrey Klochkov told Russian news channel Vesti in 2019.

The description of the sketch on vaccinations read: "Friends, we present to you another story about the difficult work of Vitaly Nalivkin! This time, the chairman is tackling important health issues."

While BARAKuda's videos may humour Russian residents, the sketches have sparked controversy.

In September, Russian comedy actress Larisa Krivonosova was jailed for 10 days for wearing an official uniform in a BARAKuda clip in which she played an interior ministry spokeswoman, The Moscow Times reported.