Skip to main content
Female students reading inside a classroom of grade 12 at a school in Afghanistan's Ghazni province. ( AFP / Hector RETAMAL)

Multiple social media posts shared a photo in December 2021 that they claim shows the aftermath of an explosion that killed "several schoolgirls" under the "Taliban regime" in Afghanistan. But the photo -- which some online users appeared to believe was taken recently -- has been shared in a misleading context. The photo had previously appeared in news reports about a bomb attack in the capital Kabul three months before the Taliban seized power in August.

The post's simplified Chinese-language caption translates as: "The Taliban regime in Afghanistan killed several schoolgirls who had insisted on going to school. They insisted on burning the corpse for public display as a warning!

"Because the scene is so bloody, the photo was deliberately blurred!" 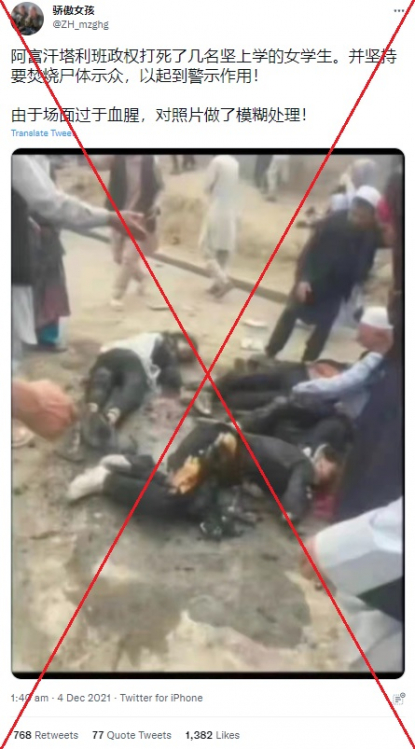 The Taliban seized power in Afghanistan in August, marching into the capital Kabul and finalising their defeat of the US-backed government.

Most public secondary schools for girls have been shut since the takeover, AFP reported.

The photo was shared alongside a similar claim in Twitter posts published in December here and here.

Comments on the posts indicated some people thought the photo was captured after the Taliban's takeover of Afghanistan.

"The Taliban showed their true colours within a few days of taking power", one user wrote.

"American [president] please quickly send troops back to Afghanistan to save the Afghan people", another wrote.

But the photo has circulated in news reports before the Taliban takeover.

A combined reverse image and keyword search found the same photo shared in this report by Afghanistan-based news agency Khaama Press on May 8.

"The Ministry of Interior Affairs said that the incident took place at around 4:27 pm local time."

Below is a screenshot comparison of the photo shared in the misleading posts (L) and the photo published by Khaama Press in May (R): 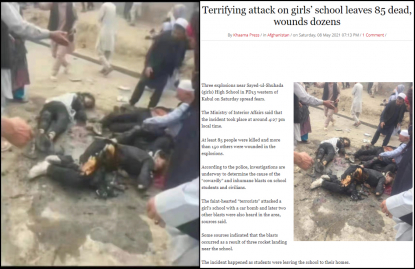 The same photo was also published in reports about the May blast by Iranian media Mashregh News here and Ahlulbayt here.

At the time, the then-president Ashraf Ghani blamed the Taliban for the blast, but the group denied they were behind it.