Skip to main content
Kenyan President Uhuru Kenyatta made several false statements in his State of the Nation Address in Nairobi on November 30, 2021. ( AFP / SIMON MAINA)

In his televised State of the Nation Address on November 30, 2021, Kenya’s President Uhuru Kenyatta wrongly claimed that the country’s economy grew by 0.3 percent in 2020. This is false; official data show that the economy actually shrunk by the same margin.

In his speech, Kenyatta praised his government for the country’s economic performance during the Covid-19 pandemic.

“In this regard, while most economies in the world shrunk, Kenya’s economy grew at 0.3 percent during the 2020 period despite the Covid challenge. Although this positive growth was minimal, the second quarter of 2021 registered the most impressive growth ever recorded in our nation’s real GDP,” he said.

A clip from the address was shared online here.

A screenshot of a Facebook post with a clip of Kenyatta’s State of the Nation Address, taken on December 6, 2021

Kenyatta also made the claim on October 20, 2021, when he spoke during the Mashujaa Day celebrations to commemorate Kenyan heroes.

But data retrieved from the Central Bank of Kenya and the Kenya National Bureau of Statistics (KNBS) show that the country’s Real Gross Domestic Product (GDP) declined in 2020. 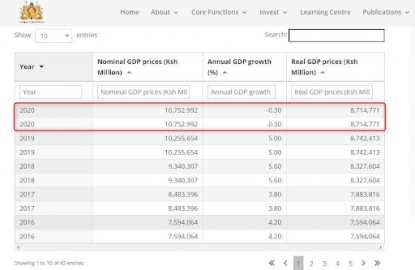 A screenshot of the Central Bank of Kenya website showing the country's GDP, taken on December 3, 2021

According to an economic survey released by Treasury Minister Ukur Yattani in September 2021, the contraction in the economy was attributed to a disruption in labour supply due to Covid-19 restrictions put in place at the initial peak of the global pandemic.

“The economic performance as measured by Real Gross Domestic Product (GDP) is estimated to have contracted by 0.3 percent in 2020 compared to a growth of 5.0 percent in 2019,” Yattani said in his speech.

This decline in Kenya’s economy was reported in the media here, here and here.

Kenyatta was wrong on other economic indicators during his November address in parliament.

He stated that the Kenya Meat Commission (KMC), which is now managed by the Kenya Defense Forces (KDF) in an attempt to revive the company, earned a total of one million Kenyan shillings (Ksh) per day (about $8,800).

“After KDF took over the Kenya Meat Commission (KMC), they turned it around in just a few months,” Kenyatta said.

But this calculation is incorrect. Based on the daily and monthly revenue cited by Kenyatta, annual earnings would be Ksh360 million, not Ksh3.6 billion.

In the same speech, Kenyatta discussed the country's growing capacity to generate power, but again erred in the calculations.

While data on the KNBS shows that Kenya’s power generation has increased in the past eight years to about 2,600 megawatts, the increment equates to 162 additional megawatts on average per year, and not 325 megawatts.

Some Kenyan economists and politicians have highlighted the misstatements in Kenyatta's address (see here and here).

“The speech was full of hyperbole designed to sell a legacy that has a mixed record,” Bunyasi Wasa, an economist based in Nairobi, told AFP Fact Check.

As of December 7, 2021, the Office of the President has not released a statement correcting any of the discrepancies in the speech.