Two images of a skull with an abnormal number of teeth have been shared online alongside a claim they show X-rays of an ordinary toddler. The claim is misleading; the images have been taken from a report in a US medical journal about an 11-year-old child suffering from a rare dental condition.

The images show a skull with an abnormal number of teeth.

The images have been shared alongside a similar claim in other Facebook posts here and here.

Reverse image searches found the X-rays were taken from a US medical journal's report about an 11-year-old girl with a rare dental condition.

The images were referenced in this 2011 article from the American Journal of Orthodontics and Dentofacial Orthopaedics.

It reported on a girl with multiple hyperdontia -- a rare condition that results in someone growing more than the regular 32 teeth.

According to the report, the girl's 81 teeth made it difficult for doctors "to differentiate between the supernumerary and the other teeth".

The journal article states: "Orthodontic treatment for this patient will be a clinical challenge because of the great number of teeth to be extracted and the alterations in the shapes of the teeth."

Below is a comparison of the images featured in the misleading Facebook post (L) and the X-rays referenced in the 2011 journal article (R): 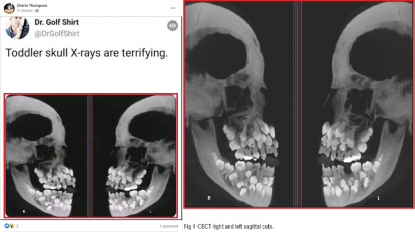 The exact cause of hyperdontia is unknown, according to medical website Healthline, but it is associated with several rare hereditary conditions.