Movie poster was altered to read 'The Omicron variant'

Social media posts share a poster for a purported 1963 science-fiction movie called "The Omicron Variant" to suggest that the pandemic and the appearance of the latest coronavirus variant of concern was planned in advance. But the poster is a digital fabrication based on one for a 1974 film named "Phase IV."

"This science fiction movie was first realised in 1963. 58 years later, here comes the real disease caused by the 'Omicron' variant of covid 19. coincidence ??," asks a December 2, 2021 tweet sharing a movie poster depicting two people and a giant hand under the night sky. 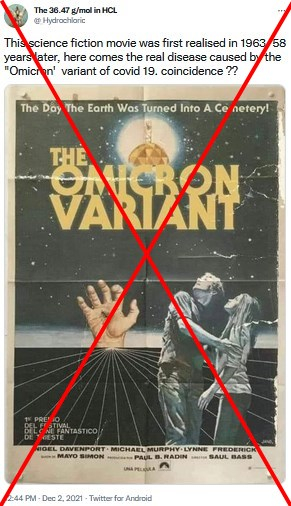 It started circulating after the announcement by the World Health Organization of the discovery of a new "variant of concern" on November 26, 2021.

Omicron, named after a letter from the Greek alphabet, quickly spread throughout the world, disrupting travel and financial markets.

Variants of concern are associated with one or more changes in the virus that may have a significant public health impact. As of early December 2021, the transmissibility and severity of the Omicron variant was still being evaluated.

But no movie called "The Omicron Variant" was released in 1963.

A reverse image search leads to a poster for a 1974 movie called "Phase IV." The image shared in the posts can be found with a Spanish title: "Sucesos en la IV Fase," on several websites selling movie posters. It can also be found on a website specialized in science-fiction and horror movies. 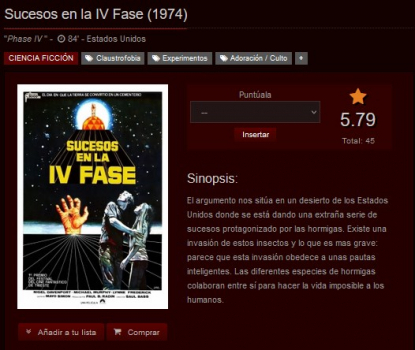 Screenshot taken on December 2, 2021 of abandomoviez.net

Saul Bass, credited as the movie director, created posters and credit sequences for films such as Alfred Hitchcock's "Vertigo" and "Psycho," Robert Wise's and Jerome Robbins' "West Side Story," and Martin Scorsese's "Cape Fear" and "Casino."

"Phase IV," his only feature film as a director, won the top prize at a film festival in Trieste, Italy, in 1975.

A synopsis of the film says: "Desert ants suddenly form a collective intelligence and begin to wage war on the desert inhabitants. It is up to two scientists and a stray girl they rescue from the ants to destroy them. But the ants have other ideas."

An AFP journalist read the film's script, written by Mayo Simon. No mention of viruses or variants is made.

Further investigations by AFP found the edited poster on the Twitter account of Irish writer and director Becky Cheatle.

In a November 28, 2021 tweet, Cheatle shared the image along with the message: "I Photoshopped the phrase 'The Omicron Variant' into a bunch of 70s sci-fi movie posters #Omicron."

She also made digital edits to posters for the movies "The Andromeda Strain" and "Colossus: The Forbin Project."

Cheatle confirmed to AFP in a Twitter direct message that she was the creator of the altered poster.

"It was just a joke based on the fact that omicron variant sounded like a 70s sci-fi movie. I didn't expect anyone to take it seriously, and I'm very much not an anti-vaxxer," she said. 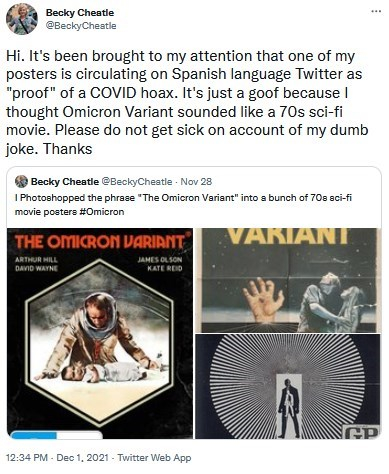 While no trace of a movie called "The Omicron Variant" could be found by AFP, a science fiction comedy by Italian director Ugo Gregoretti called "Omicron" was released in 1963.

A synopsis describes the plot as: "An alien takes over the body of an Earthman in order to learn about the planet so his race can take it over."

AFP Fact-Check previously examined claims that the release dates of the variants were pre-planned.