A video has been viewed tens of thousands of times on social media alongside a claim that it shows a fire-emitting bird which is responsible for forest fires in Australia. The claim is false; the video was created by a special-effects artist who told AFP that it is a manipulated footage of a southern lapwing, a bird commonly found in South America. Ornithologists explained that some other birds intentionally spread forest fires by moving burning sticks to flush out prey, but there are no birds that can emit fires.

It bears the title, "Bird That Shoots Fire", and shows a bird apparently emitting a jet of fire. 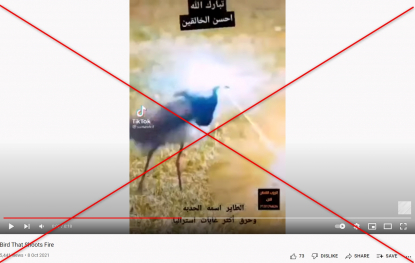 Arabic text overlaid on the bottom of the image translates to English as: "This bird is called the 'Hovering Kite'. It has caused the fires in most of Australia’s forests.”

At the top of the image, another text in Arabic reads: “Glorified/Blessed is Allah the best of creators.”

While some comments on the YouTube video questioned whether the image was genuine, other viewers appeared to believe it was real.

"It is true, it has taken some Spanish photographers years to catch that fantasy on Camera, that was in slow mo by super cameras," read one comment.

The video was also shared with a similar claim here on Facebook.

The clip has been viewed more than 145,000 times after it also appeared with a similar claim in other languages, such as Arabic and Indonesian on YouTube, and Swahili on Twitter.

Through a combination of reverse image search and subsequent keyword searches, AFP found this footage, which was uploaded to YouTube by Brazilian visual-effects artist Fabricio Rabachim on December 14, 2020.

The description in Portuguese beneath the video translates to English as: "Everyone who has ever encountered the quero-quero protecting its nest knows how threatening it is, but few have seen its true power..."

"Quero-Quero" is the Portuguese name for the Vanellus chilensis, or southern lapwing, a bird species commonly found in the grasslands and wetlands of South America.

Below is an AFP photo of a southern lapwing: 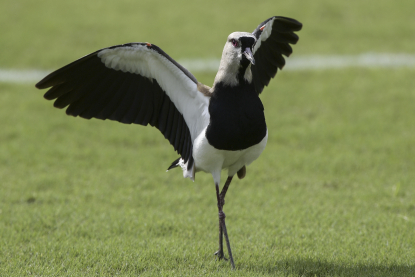 A southern lapwing (Vanellus Chilensis) spreads its wings in Salvador, the capital of Brazilian state of Bahia, on June 19, 2019. ( AFP / Juan Mabromata)

Rabachim told AFP via email on December 7, 2021, that he had enhanced original footage that he had shot of the bird using what he described as "CG and a little bit of compositing for the effects".

Rabachim further said he had taken the footage of the bird in Ibirapuera Park, in the Brazilian city of Sao Paulo.

"I love going to the park and filming plants, insects and animals, that day this bird was close to me and I had my camera in my hands, so I pointed at it and the bird acted for me," he told AFP.

Below is a screenshot comparison of the video in the misleading post (L) and Rabachim's YouTube video (R):

“No. There are no birds that 'emit' fire or could do so," said  Australian ornithologist Bob Gosford in an email to AFP on November 28, 2021.

Mark Bonta, a US-based cultural geographer and geophilosopher, also told AFP via email on November 24, 2021, that there are no birds that can emit fire.

Both experts identified the bird in the misleading posts as a lapwing, with Gosford specifically saying it looked like a southern lapwing.

However, they also pointed out that some other birds can intentionally start fires by spreading burning sticks to flush out their prey, as detailed in a paper they contributed to, published in the Journal of Ethnobiology in December 2017.

It explains: "Observers report both solo and cooperative attempts, often successful, to spread wildfires intentionally via single-occasion or repeated transport of burning sticks in talons or beaks."

Gosford gave an interview about his research to Australian Broadcasting Corp in March 2016 here, detailing accounts he had been given by eyewitnesses who had seen birds at the front of forest fires picking up burning twigs and dropping them on unburned areas to spread the flames.

"There is no doubt that some of the fires these birds are involved in could result in large-scale fires, but I must note that we have no evidence of these birds doing so," Gosford told AFP.

"That notwithstanding, some fires in the tropical savannah country in northern Australia can be very large and run for many days, if not weeks."