Skip to main content
A solar panel range is seen in what was once a field used for agriculture near Huron, California, on July 23, 2021 ( AFP / Robyn Beck)

A Facebook post shared thousands of times claims that putting solar farms on agricultural land contributes to global warming because an acre of corn can capture 36,000 pounds of carbon while the panels cannot. This is misleading; corn absorbs carbon into its biomass via photosynthesis but most of it is later released, and using solar panels to replace fossil fuel energy sources avoids the production of greenhouse gases in the first place.

"Wanna cause global warming? Solar panels on farmland is a good place to start," text in an image featured in a November 21, 2021 Facebook post says.

The post claims that, according to a Michigan State study, an acre of corn "sequesters" 36,000 pounds of carbon per year, while the acre of grass onto which solar panels would be built only "draws down" 920 pounds of carbon, thereby causing 35,080 fewer pounds to be removed from the atmosphere. 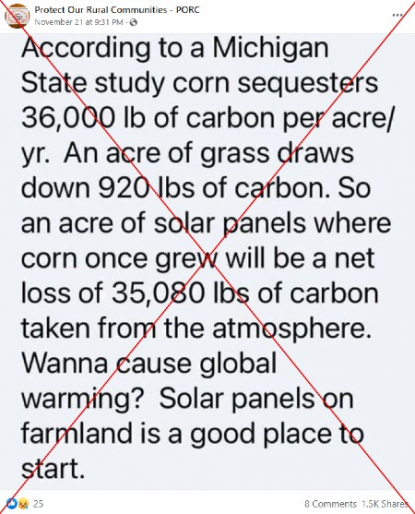 The posts, published on the Facebook page "Protect Our Rural Communities" and others, reflect a nascent problem in rural parts of America as the country embraces renewable energy in an attempt to move away from fossil fuels: land use competition between solar farms and agriculture.

"We are increasingly seeing pushback in rural areas related to utility-scale solar development," Jordan Macknick, an analyst at the National Renewable Energy Laboratory (NREL), told AFP. "In many cases, solar projects are being proposed on current or former farmland, and there is local resistance."

However, solar farms do not worsen global warming.

The numbers cited in the posts are real, albeit misinterpreted. The study that the post refers to is an article published by the Michigan State University Extension in 2007 titled "Corn fields help clean up and protect the environment," which explains the impact that farmed corn can have on the carbon cycle.

"How much carbon dioxide does an acre of Michigan corn absorb in a growing season?" the article asks. "Our calculations show that number to be in excess of 36,000 lbs. of carbon dioxide per acre!"

However, Kurt Thelen, the professor at Michigan State University's Department of Plant, Soil and Microbial Sciences who oversaw the corn research, said: "The statement in the recent post... is taken out of context."

He pointed out that the sentence that comes after the 36,000 pounds figure says: "Of course, much of that carbon is eventually returned to the atmosphere as the corn crop residue decomposes or the grain is consumed as feed or burned as biofuel."

The post mentions sequestered carbon, the long-term storage of atmospheric carbon dioxide, but in the case of seasonal crops, the storage is short-lived, hence the use of the word "absorption" in the article.

"Carbon assimilated in the crop via photosynthesis does NOT equal carbon sequestered," Thelen said. "The 36,000 lb/acre is a snapshot in time of the amount of CO2 a corn crop assimilates (absorbs) at its peak biomass accumulation during the growing season."

Thelen's research does advocate sequestering carbon in the soil of corn farms using practices such as no-till and cover crops, but this is a different process altogether. "These practices can sequester in the range of 300 to 1,000 lbs of carbon annually," he said.

More crucially, the posts do not take into account the amount of carbon dioxide saved from the atmosphere by the use of solar panels.

Macknick, the NREL analyst, said that calculating avoided emissions is complicated by a wide range of factors at play in different contexts, including sun exposure or the fossil fuels replaced.