These pictures show Muslims in Turkey offering prayers in 2020, not 2021

The photos —  which show people praying in the rain — were posted on Facebook here on August 10, 2021. 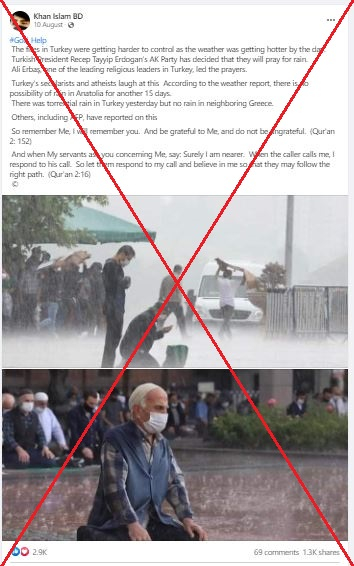 The post caption reads in part: "The fires in Turkey were getting harder to control as the weather was getting hotter by the day. Turkish President Recep Tayyip Erdogan's AK Party has decided that they will pray for rain. Ali Erbaş, one of the leading religious leaders in Turkey, led the prayers.

"There was torrential rain in Turkey yesterday but no rain in neighboring Greece.

"Others, including AFP, have reported on this."

Eight people were killed and dozens hospitalised after wildfires erupted on the southern coast of Turkey in late July 2021, AFP reported on August 5.

All major wildfires were reported to have been extinguished by August 12, 2021, according to this article by Turkish daily the Daily Sabah.

The same photos also appeared with a similar claim here and here.

Both pictures have been shared more than 3,200 times after they circulated alongside a similar claim in Indonesian here and here.

A reverse image search on TinEye found the two pictures were published in this photo report by Turkish daily Yeni Safak on June 19, 2020.

The report's headline translates to English as: "Friday prayers under heavy showers in the capital."

Haci Bayram-i Veli Mosque is located in Ankara, the capital of Turkey.

Below is a screenshot comparison of the pictures in the misleading post (L) and the photos published by Yeni Safak (R): 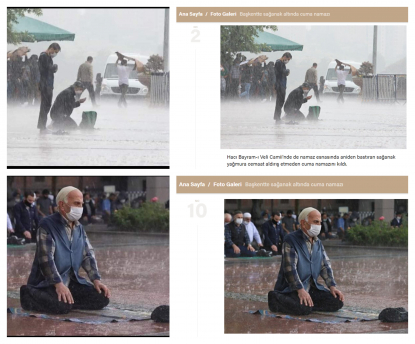 In this video broadcast on July 30, 2021, by Diyanet TV, Erbas can be seen praying for rain at Antalya-Manavgat Kulliye Mosque, located in the city of Manavgat, which experienced huge forest fires in the last week of July.

"Send Your rains, dear Allah", he says at around the 11-minute mark.

However, there have been no official reports that Erdogan ordered people to pray for rain during the wildfires.

The AFP report about raining in Turkey but not in Greece mentioned in the misleading post was published on August 7, 2021, with headline: "Mass evacuations a Greek fires rage, but Turkey saved by the rain."

However, some days later, on  on August 12, AFP also reported that rain fell in Greece.