Articles and video footage shared on social media claim mothers vaccinated against Covid-19 suffered 13 stillbirths in 24 hours at a hospital in western Canada. But there is no evidence that this occurred, local health authorities say there is "no truth" to the claim, and independent experts say available data does not show that the shots caused an increase in stillbirths.

"13 STILLBORN DEATHS IN 24 HOURS - RALLY @ LIONS GATE HOSPITAL," says the title of a November 14, 2021 Bitchute video viewed tens of thousands of times, the description of which says the women affected "had taken the experimental injection."

The video shows a small protest that took place on November 11 in British Columbia at which demonstrators claimed that doulas -- professionals hired to provide support during childbirth -- came forward with the information.

Online articles repeated the claim, but like the video gave no dates for when the stillbirths allegedly occurred. 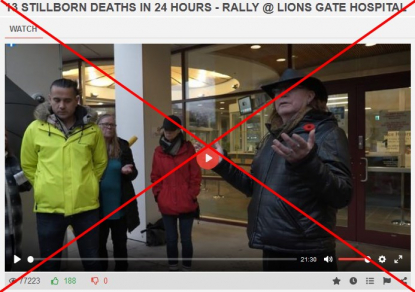 Screenshot taken on November 26, 2021 of a video on Bitchute 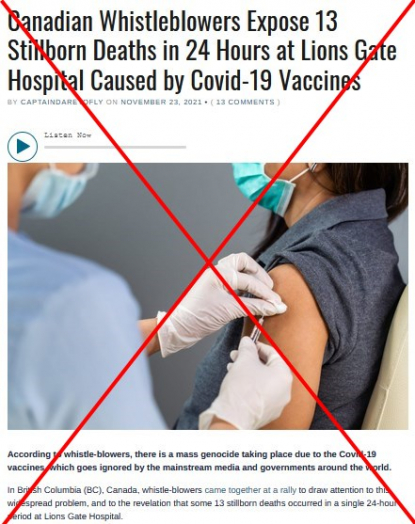 Screenshot taken on November 26, 2021, of a Daily Expose article

One of the main speakers in the video can be heard admitting he is not in fact certain of the vaccination status of the mothers. "What we have to say is that we know that 13 babies died. We don't know how many of those women were vaccinated."

The claim spread online after Canada authorized booster shots of the Pfizer-BioNTech for adults age 18 and older. More than 89 percent of the population over the age of 12 had received at least one dose of a Covid-19 vaccine as of November 20.

"There is no truth to this claim and the individuals spreading this false information have no affiliation to either Lions Gate Hospital (LGH) or Vancouver Coastal Health (VCH)," it said, adding: "There has been no notable change to the incidence of stillbirths in the VCH region throughout the Covid-19 pandemic."

The spokesperson also said the numbers were not out of line with the previous year, explaining that "in 2020/2021, there were 3,299 births and a total of 11 stillbirths."

Pregnant individuals were excluded from the clinical trials for the Pfizer-BioNTech and Moderna shots, but the Society of Obstetricians and Gynaecologists of Canada (SOGC) said in a statement on November 4 that "a growing body of data demonstrates no difference in rates of spontaneous abortion, stillbirth, preterm birth nor other pregnancy complications."

SOGC pushed back against the stillbirths claim in a series of tweets on November 25, saying: "Following careful review of Canadian data, there is no evidence of increased stillbirth rates as suggested."

"There is no data showing any increase in stillbirths due to any of the Covid-19 vaccines. A Covid-19 infection during pregnancy is associated with an increased risk of stillbirth," it said.

This was further confirmed by Deborah Money, professor of obstetrics and gynaecology at the University of British Columbia, who said on November 25 that "there has absolutely not been an increase in stillbirths since the start of the vaccine campaign in Canada," and there is "no biological plausibility to suggest that there would be a link between stillbirth and vaccination."

Other Facebook posts and an online article suggest that Ontario also recorded an unusual number of stillbirths. 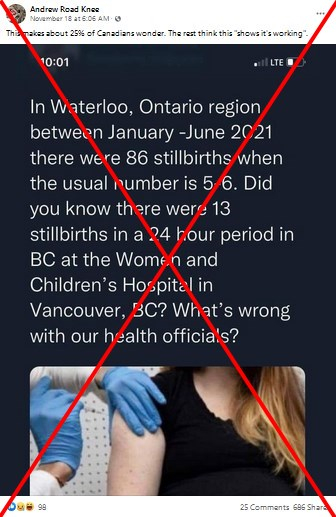 But Grand River Hospital in Waterloo said on Twitter that there is "no truth" to claims of an increase in stillbirths in the region.

And Deshayne Fell, scientist at the Children's Hospital of Eastern Ontario (CHEO) Research Institute, said on November 26: "According to BORN Ontario, the province's birth registry, the incidence rate of stillbirth in Ontario between January and June 2021... was not increased."