An image is circulating in social media posts that claim it shows Taliban leaders with very large bellies after they purportedly gained weight during the group's first 100 days in power after taking over Afghanistan in August. The posts are misleading; the picture has been doctored to make the men appear fatter.

"Today, the Taliban in Afghanistan celebrates 100 days in power. Look at their bellies. Food is getting better," reads a Chinese-language tweet posted on November 20. A screenshot of the misleading post taken on November 23, 2021

The same image has been shared on Twitter here and here.

The posts circulated 100 days after the Taliban swept back to power in Afghanistan in August.

"Just a hundred days and they gained weight like this, these people will be fattened to death," one person commented.

"They were probably starving when they were in the valley, so now they're in the city, they must eat a lot for their stomach to be so full like this," another wrote.

A keyword and reverse image search on Google found the original version of the photo in AFP's archives.

The photo shows Taliban representatives in the Qatari capital Doha, where they were attending talks with then-US secretary of state Mike Pompeo on November 21, 2020. 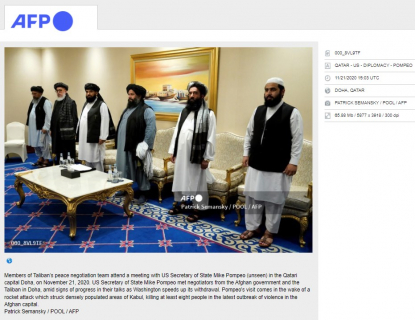 Pompeo called on the Afghan government and Taliban negotiators to speed up their peace talks as Washington accelerated its military withdrawal from Afghanistan.

Below is a screenshot comparison of the doctored photo (left) and the original photo (right).

Charities have warned Afghanistan is facing one of the world's worst humanitarian crises.

More than 22 million Afghans will suffer food insecurity this winter, the United Nations said in October, as a drought driven by climate change adds to the disruption caused by the chaotic Taliban takeover.